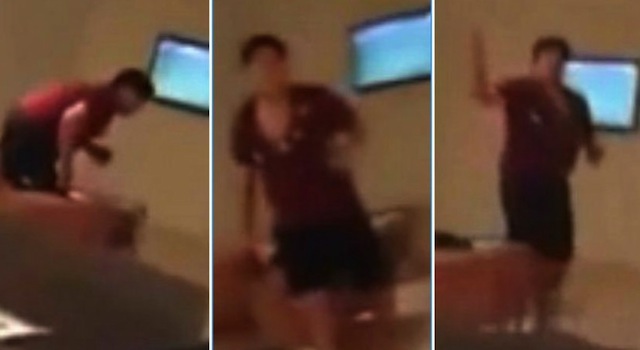 His case also isn’t helped by the fact that she’s screaming ‘stop hitting me’ in the video.

Even though he retired almost 20 years ago, Diego Maradona never seems to be out of the news too long due to the fact he’s an absolutely mental character who’s always going on cocaine binges or doing forward rolls on the touchline for random Dubai teams he’s somehow ended up managing.

Unfortunately though this time he’s in the news for something a lot less cool than either of those things, as a video has emerged of him allegedly hitting his ex fiancee, 24 year old Rocio Oliva  (the less said about her being 24 the better).

In the clip – which was broadcast on Argentinian national television – a seemingly drunk Maradona is seen confronting Oliva about her excessive mobile phone use and then seemingly hits her, although it’s kind of hard to confirm that 100% from the video.

Maradona has responded to the video by releasing the following statement:

Yes, I threw the phone but I swear to God that I have never raised my hand against a women.

The episode started and ended like that. I admit to throwing the phone, but nothing else.

To be honest it doesn’t really look like he’s throwing the phone in the video and more like he’s hitting her but. His case also isn’t helped by the fact that she’s screaming ‘stop hitting me’ in the video.

It isn’t looking too good for Maradona. If you want to remember his glory days though, check out this recently discovered new angle of his incredible goal against England in the 1986 World Cup. You know the one.