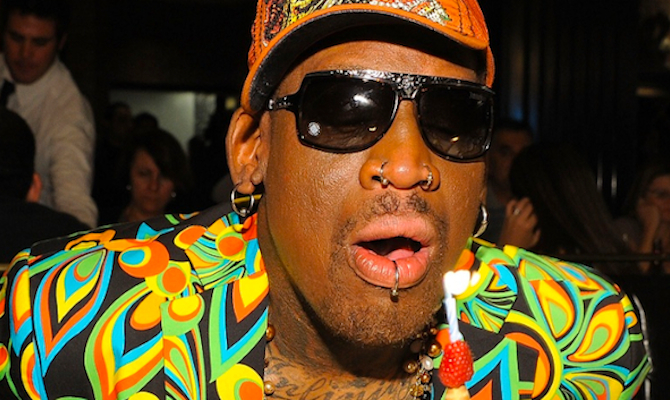 The flamboyant, towering, technicolour giant that is Dennis Rodman is the most unlikely face you can think of for a diplomat but the U.S. have disregarded that and sent him over to North Korea anyway. 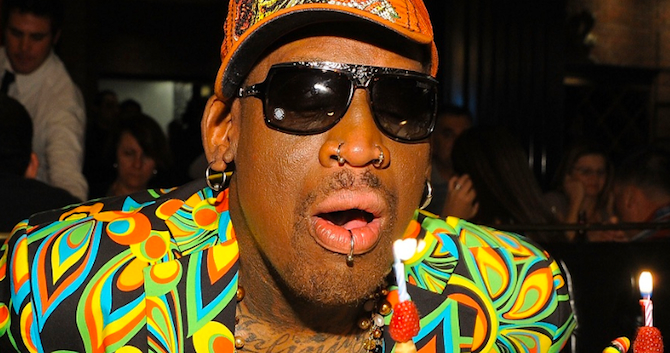 The flamboyant, towering, technicolour giant that is Dennis Rodman is the most unlikely face you can think of for a diplomat to be sent to a country where male fashion rarely ventures beyond military khaki and facial hair is forbidden but this is exactly what has happened.

He is just one Botox injection away from resembling what Pete Burns’ designer vagina may look like. A face that was recoiling in horror just about the exact time of a wind of hurricane proportions changed directions. Now his piercings seem to be holding that grotesquely happy and drunk maze of a face in place.

Rodman has been a bit of a reprobate when it came to his womanising and drug and alcohol abuse but it was only until he appeared on our very own celebrity voyeurism in Celebrity Big Brother that we all realised this guy has well and truly lost the plot. He has attempted to regain some status several times with CBB and America’s The Apprentice, in both of which he was drunk 95% of the time.

Well now, is he a hero? Or is this another lame attempt at being in the limelight?

It would appear that Rodman is ambassador for sports diplomacy.

Rodman was spotted over in North Korea sitting right next to the prodigical child himself Mr Kim Jong-un at an exhibition basketball game where North Korea and the US played in mixed teams, in Pyongyang.

Apparently Kim Jon-un is a big old fan of basketball and of Rodman. In fact, didn’t you see the haircut policy he released for all North Koreans to abide to – it clearly had the Rodman on it, so he is obviously a huge fan of the Leopard print painted Afro.

Rodman later addressed Mr Kim before a crowd of thousands, telling him, “You have a friend for life.”

â˜› This Is Crazy: Belgian Basketball Player Misses Four Simple Layups In A Row When Shooting In The Wrong Net 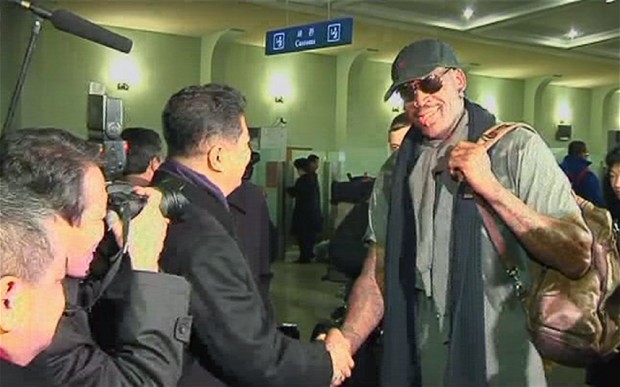 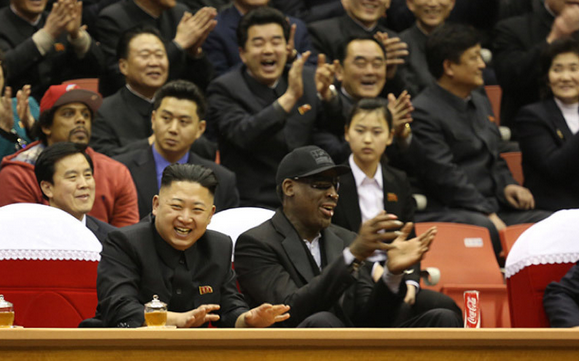 Which makes us all think, what the hell are you up to Rodman? Have you truly got no taste as to befriend this man, leader of the one of the vilest communist regime on the planet?

Or perhaps this kid aint all so bad. His dad was a turd, his granddaddy was a turd but maybe this kid just has dreams of becoming an NBA player. He could of course be throwing down the decades of turmoil between the two nations in order to snag those front row seats at the next Harlem Globetrotters exhibition game.

Actually Rodman is there with some of the Globetrotters attempting to set up a young persons sports camp. He is also joined by VICE, who love making documentaries in North Korea.

This does all come “at a time of heightened tensions between Washington and Pyongyang”.

North Korea has just been blowing the shit out of their country with nuclear tests a couple of weeks ago, looking dead into the eyes of ‘Merica while doing it. Warning them of what they’re packing.

So perhaps Rodman is actually not looking for world fame again, perhaps he is just now playing a part of peace negotiator between the states and Korea by offering up those golden front row tickets at the Staples Centre.

There is no denying that at times when there is conflict between nations it is important to keep communications open and isn’t that what is happening here? Let us know your thoughts about all this in the comments.