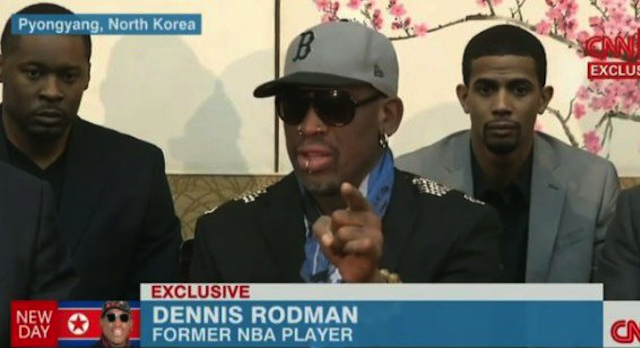 Dennis Rodman is over in North Korea with a team of retired NBA pros playing basketball for Kim Jong-Un’s birthday, but he had somewhat of a bizarre meltdown when interviewed by CNN about the situation.

Dennis Rodman is in North Korea to play basketball for Kim Jong-Un’s birthday with a team of retired NBA stars (obviously) but decided to take a little time out of his schedule to do an interview with CNN’s Chris Cuomo and subsequently embark on one of the most bizarre meltdowns we’ve ever had the pleasure of covering.

The interview started going awry when Cuomo asked Rodman whether he would be using his friendship with Kim Jong-Un to try and help Kenneth Bae – the American man who has been imprisoned in North Korea for a while now on very vague charges. This was a question that Dennis Rodman did not react well to and sort of ended up going on a bizarre, ranting meltdown at the presenter, that kinda reminded me of a really bad WWE promo where the wrestler kind of forgets the point he’s trying to make is and just keeps ranting and yelling out buzzwords in the hope that nobody will really notice.

This was probably my favourite part of the interview, where Rodman makes no sense whatsoever:

Cuomo: ‘We don’t know, no charges were released’.

Rodman then starts talking about the sacrifice that the former NBA players have made to go over there to play on Kim Jong-Un’s birthday, which is obviously nothing to do with the actual question. He also seems like he might be on crystal meth. In any case, it’s almost as if he’s been brainwashed and has absolutely no idea what is actually going on over there and how completely messed up his buddy Kim really is.

Check out the video below, it starts getting good around 4:30.