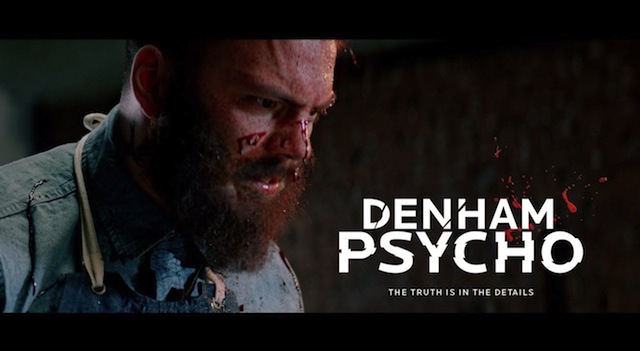 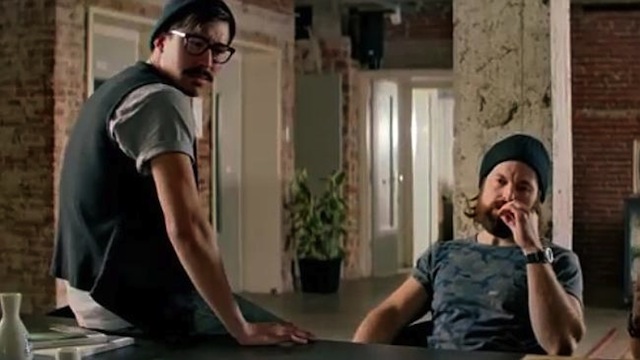 Instead of getting worked up about each other’s business cards, these guys are more interested in each other’s jeans. Hipster #1 is rocking virgin denim, nice, and gets a respectful ‘ooh yah’ to acknowledge a fine choice. Hipster #2 thinks he can go one better, however, and reveals he is wearing what he describes as the perfect skinny. “Practically a second skin.” Hipster #3 raises the bar once more with his “new” vintage denim, an Italian laundry recipe that is based on a 36-month wear pattern. But hipster #4 has gone for something extra special — Otaku, the holy grail of Japanese denim, which is reputedly washed in Sake.

Nope, I’m not sure what any of that means either.

The hipster Patrick Bateman (Bikeman. Obviously) isn’t going to stand for someone wearing more desirable denim than him. If you haven’t seen the original I won’t spoil the ending for you, but it involves Indonesian kopi luwak coffee beans.

The creative director of the agency who made the parody, Amsterdam based Flickering Wall, said he came up with the idea after listening to Denham’s founder Jason Denham talking about jeans: “I recognized the same manic attention to detail and ravenous appetite for craftsmanship. This triggered the idea for a modern-day remake of the scene.” They definitely hit the nail on the head with this one, watch the video below:

And here’s the original scene in case for some ridiculous reason you haven’t watched it before:

â˜› Up Next: Frustrated American’s Angry Rant At Justin Bieber