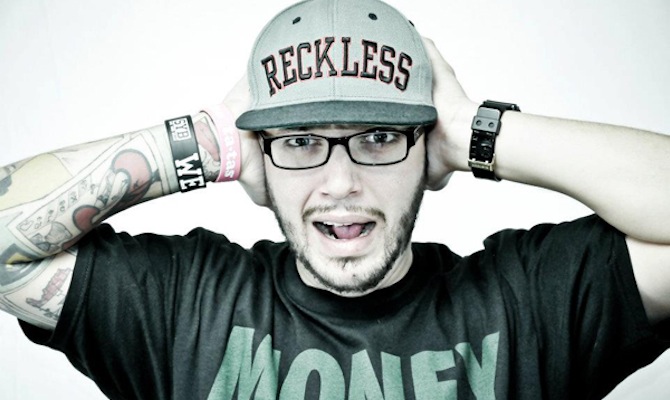 So thereâ€™s this Dude called Robbie Wilde, and he is a professional DJ despite being completely deaf. What a complete sicko. Read his story here.

Meet Robbie Wilde: He is a professional DJ who was born completely deaf in his right ear, and 80% deaf in the other. Despite this, he is managing to forge a successful career as a DJ and producer. Now I normally wouldn’t write about things like this, but this particular story jumped out at me because I can sympathize to some degree with his situation; I developed a serious ear infection when I was 10 that left me temporarily completely deaf in one ear and partially deaf in the other; Luckily, I recovered pretty much full hearing (although my left ear is still a bit dodgy) and so now I have some idea of how frustrating and difficult it can be to live without the ability to hear. With this in mind, I find it pretty incredible that this dude has actually managed to begin to make a career using a skill that relies pretty much exclusively on a good sense of hearing.

So how does he do it you might ask? Well, he is dependent almost entirely on his laptop DJ software to differentiate between the various sounds and tracks. He has also learned to feel the vibrations from the subs and speakers and has a specially adapted seat cushion that helps him feel the music. He is also pretty good on the turntables, which is an essential tool in a DJ’s arsenal. Now I’ll admit, I know pretty much nothing about DJing, but I can imagine that mastering the turntables and stuff is a skill that can take people years to learn, so for a deaf person to be able to do it for a living must be something else entirely. He has also had training from two-time DMC world champion DJ shiftee; I don’t know who he is or what he had to do to win, but it all sounds pretty cool. Robbie’s skills have even seen him feature in a commercial for one of Hewlett-Packard’s touch screen PC’s.

Now Robbie is by no means the first deaf musician, but he is pretty much the only deaf DJ that I’m aware of; for this reason he has been described by some in the industry as ‘the modern Beethoven’ – for those of you that don’t know, Beethoven started to lose his hearing at the age of 25 and actually composed some of his best known pieces when he was completely deaf. I don’t know about you, but I love me some Beethoven every now and again, the dude was a genius. Some other famous musicians who have hearing problems (some brought on by years of headbanging, loud music and other rock and roll stuff) that you probably didn’t know about include: Eric Clapton, Pete Townsend, Jeff Beck, Neil Young and even will.i.am. To be fair to him, I think being a member of the Black Eyed Peas is enough to make anyone go deaf.

So how far will Robbie Wilde go in the industry? I guess nobody really knows. Aside from being a talented and creative individual, he has taken advantage of his position as probably the only deaf DJ in the game (and why not? fair play to the lad). He promotes himself as thatdeafDJ and even went as far as to get a tattoo on the back of his right ear saying ‘out of order’. Dope.

Now I’ll admit, I’m not a major fan of his type of music, but I can appreciate a good tune or dance remix when I hear it; I appreciate it even more when I realize that the guy who composed or produced it is pretty much completely deaf. I mean, most people with perfect hearing couldn’t do this shit, and from what I’ve heard on the radio recently, quite a lot of them are actually completely whack at what they do. I guess it just goes to show what can be achieved with determination and persistence when faced with a pretty devastating condition. You can check out his music and remixes here