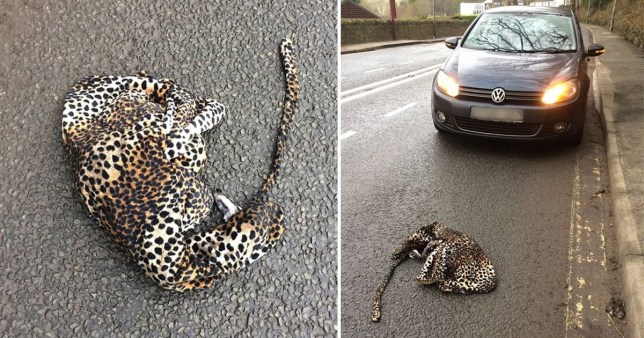 A man has described how he cautiously approached what he thought was a dead or injured leopard in the road while driving through West Yorkshire.

Ben Lilly, 40, passed the spotty shape on the A646 near Hebden Bridge on Saturday morning and turned his car around to get a closer look.

He then stepped out of his car and tentatively approached the figure, fearing he could have his ‘face ripped off’ by the beast.

Except it turned out to be an abandoned leopard onesie, as Ben revealed on Facebook:

Careful! Dead leopard in the road on way to Halifax! Oh no, it’s some tart’s coat from last night, can’t believe I turned back for this!’ 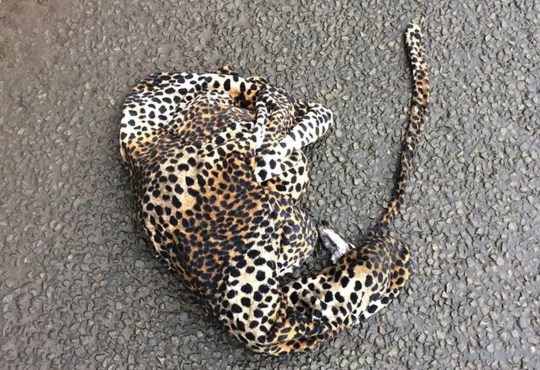 My heart was racing with a kind of excitement. I thought “is this a big cat?” It would be an amazing thing to find.

I saw something in the distance as I was coming round the bend and slowed down, giving it a wide berth in case it was an injured animal.

As I passed it, I looked out the passenger’s window and saw the markings on it. It had the tail bit on it too, so it looked really real while I was driving. ‘I thought “wow”. You hear of these sightings of big cats and around the Halifax area, there have been reports before.

I spun round where I could, turned round and drove back along. I looked again – it looked real. I then parked behind it and looked from within the car. 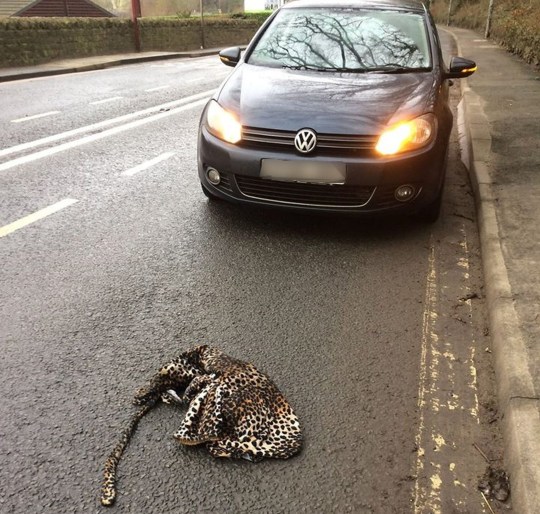 I got out cautiously, because I didn’t want something taking my face off, but as soon as I looked at it from the other angle I started laughing.

I crept up with my phone out and as the angle changed, I felt like I was on candid camera. I was chuckling to myself. I started laughing then to save my own embarrassment.

I pulled up to a onesie. That explains the tail on it. At the time I thought it was a woman’s fur coat. I thought someone had had a good time and left their coat behind.

Living near the Pennines you do often see road kill in the road – foxes, badgers or the odd person’s pet.

When I came back later, someone had pushed it onto the pavement. A few people had commented saying they’d also seen it.

Other drivers were obviously thinking the same thing, but I was just silly enough to stop.

On some of the grief he’s received for using the word ‘tart’ in his Facebook status:

I made a joke about the ‘tart’s coat’ which a couple of people might have thought was a little bit sexist, but at the time it had been a Friday night, it was Saturday morning and Halifax is a bit of a drinking town.

Well that’s fair enough really. This probably wouldn’t have even been worth blogging if Ben hadn’t had described it as a ‘tart’s coat’ and gave us the layup for that headline. Also shout out to Kat Slater or whoever the joker was who left the leopard onesie in the middle of the road in the first place – that had to be some kind of drunken prank, surely. Pretty successful one considering it’s now being blogged all over the internet.

To watch a guy get his head completely scalped by a leopard when it attacked his village in India, click HERE (NSFL). Wonder if Ben would have bothered if he’d seen that image?