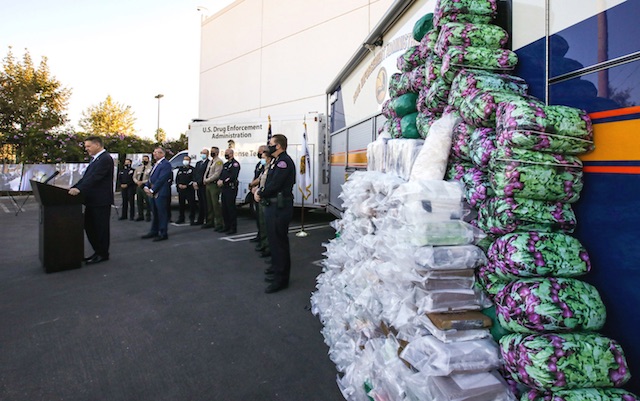 That’s a lot of meth.

Normally I’m kinda bummed out when we write about a big drugs bust on here because it means that prices are probably going to go up and quality is going to drop as demand soars, but this time I’m actually pretty stoked on it because the drug that has been seized is meth and we all know that that’s the drug that sucks the most.

It’s also an unbelievable amount of the stuff, as the DEA announced that they had confiscated 2,200 pounds of meth, 460 kilograms of cocaine and six kilograms of heroin following a series of raids in Riverside County, California earlier this month. The operation was the result of an investigation into a large-scale drug-trafficking organisation with ties to the Sinaloa Cartel.

The drugs were first seized in a Sam’s Club parking lot in Moreno Valley as they were passed in duffel bags between two vehicles. Warrants were then obtained for two suspected stash houses which were then raided, one in Moreno Valley and the other in Perris. Sounds like the series finale of ‘The Wire’ or something. Very dramatic.

Here’s what DEA Acting Administrator Timothy J. Shea had to say about it:

The largest DEA domestic seizure of methamphetamine in history is a significant blow to the cartels, but more importantly it is a gigantic victory for communities throughout Southern California and the United States who have had to deal with the torrent of methamphetamine coming into their neighborhoods.

These two seizures are more than enough to provide a dose of meth for every man, woman and child in the United States and Mexico.

Someone who’s responsible for this quantity of drugs is someone who is very, very trusted by the cartel.

Sounds like a win all round. Meth is an absolutely disgusting drug that turns people into walking zombies and literally ruins their lives, so any bust that gets that off the streets is a major plus in my opinion. Same goes with heroine. Shame about the cocaine sure, but I think the corporate bros up in Los Angeles can take the hit on this one for the benefits, don’t you?

For more of the same, check out when the cops seized £100 million of cocaine earlier this year. At least it’s been a good year for some people I guess.