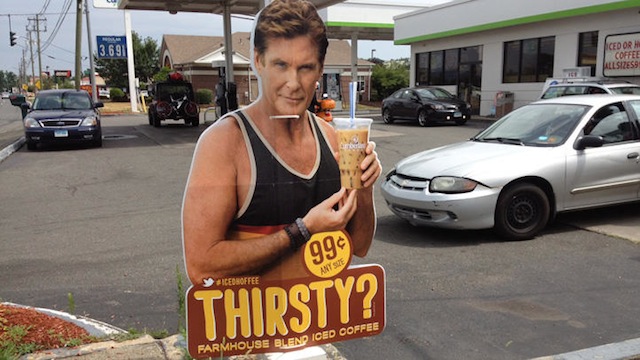 We know already that David Hasselhoff isn’t afraid of cheese, the guy pretty much invented it with his expert production key to those quite incredible montage scenes from Baywatch. This week however, he has taken it to the next level performing a beautiful heartfelt ballad to…. an iced coffee.

The song entitled ‘Thirsty for Love’ features an advert to promote Cumberland Farmhouse Blend and stars the actor/singer/loud-talent-show-judge re-enacting his Baywatch days by surfing, paragliding and water-skiing over the beautiful Californian sands, all with his Iced Hoffee (sorry) in hand.

To be fair The Hoff, decked out all in white, is still looking pretty good for his 60 years and he even shows off some of the chest that made him famous back in his heyday. However, this time it’s accompanied by a chain highlighting price of the drink, a steal at ’99cents a prize, for any size’ (his words not mine).

The best bit of the whole thing though are the lyrics. Just in case you were left in any doubt about how much The Hoff loves Cumberland Farmhouse Blend he serenades the drink with lines such as ‘I’m so thirsty for your love I can’t hide it/I’m so crazy for your taste and I just can’t deny it’, and the even better ‘Farmhouse blend I’m gonna pick you up, In the hot summer sun I’m gonna sip you up’. Classic.

This isn’t the first time The Hoff has been more than willing to take the piss out of himself. The video for his 2006 single ‘Jump In My Car’ is also pretty special. It features the man himself reliving his ‘Knight Rider’ days by selecting one of three (much younger) women to come for a ride with him before they each argue about something and he kicks the, out, all accompanied some of the best blue screen backdrops I’ve ever seen and shots of Hoff in a ‘Don’t Hassle The Hoff’.

The lifelong cheeseball award surely goes to The Hoff right?

Read Next: New Pamela Anderson Advert Is Banned In The UK For Being Sexist And Degrading To Women