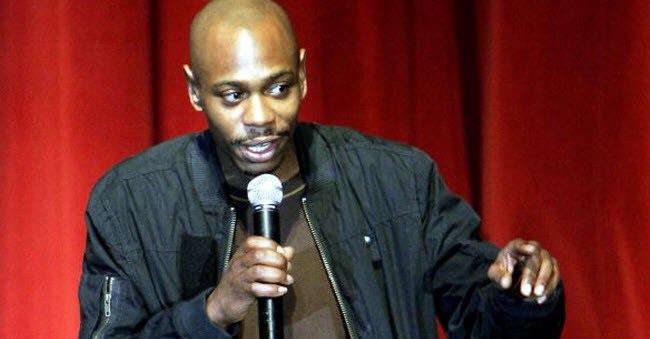 â€œHe was very cocky and kept mentioning a banana incident in Mexico.”

According to multiple people, Dave Chappelle completely bombed during a show in Detroit last Thursday after showing up on stage an hour late completely wasted and barely making any jokes.

Instead he spent most of the set sitting down and smoking, and when someone yelled “Let’s hear some of the act!” he replied “Well sir, it’s a little late for that. Right now I’ve gotta get off stage because it’s 2 in the morning” (it was actually 1 in the morning).

— “He told a girl in the audience he wanted to fuck her tonight, more than once.”
— “Was laughing at all his own jokes, was extremely slap happy.”
— “At one point, someone threw a blunt and lighter on stage to which Dave replied that he would ‘save for later.’”
— “He lost the crowd when he started to field questions.”

— “Someone definitely threw a blunt on stage and security took it away.”
— “He told the audience several times that he had ‘no material.’”
— “He was horrible. He just kept smoking cigarettes.”
— “He could barely stand.”
—  “A friend of hers said, ‘I’d rather go see Disney on Ice than him ever again. And I hated Disney on Ice.’”
— “He was very cocky and kept mentioning a banana incident in Mexico.”

— “You could tell right off the bat he was wasted.”
— “He told a joke, and an hour later, told the same exact one. He didn’t even realize it, and it wasn’t funny.”
— “The place was half-empty by 12:30 a.m.”
— “It was like watching your drunk friend out there. It was hilarious at first, but then you’re like, ‘What on Earth is happening?’”
— “He kept saying, ‘I don’t know what you want me to talk about, I have no material.’”
— “Event staff were kicking out people who were screaming (heckling).”

One of Dave’s reps conceded:

Out of the 50 shows on the tour, Thursday was definitely not his best set. On the flip side, the incident inspired some additional sharp-witted material and (Friday) he came back with a vengeance.

OK, so sounds like this show was a bit of a hiccup and Dave is generally on form. He better be since he’s got that new show coming up on HBO. Still you’ve got to believe that a drunk Dave Chappelle is still more entertaining than most sober comedians out there right now. We should expect the occasional crappy performance from the guy who turned down tens of millions of dollars to go live in isolation in Africa.

Here’s some A+ stand up magic from Chappelle: