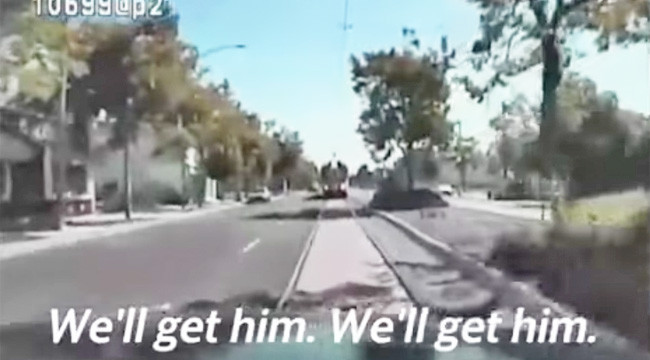 When will it end?

White policemen shooting unarmed black men sadly seems to happen every day over in the United States. And when you see videos like this, it helps us realise the mindset that the people in positions of authority over there seem to have and why it’s so common: because they’re all assholes basically.

This point can’t really be illustrated more than in this video, where two police officers try to run over a mentally disabled black man before they get out of their car and shoot him about twenty times just seconds later. To say things escalated quickly would be an understatement:

Jesus. In fairness to the two cops – Randy Lozoya and John Tennis – Joseph Mann was on methamphetamine, waving a knife around and acting like he was mentally unwell, but that’s still no excuse to try and run him over and shoot him so many times. Just use a taser FFS – it doesn’t really look like he was being a threat to anyone when you go over the video, does it?

Tennis and Lozoya have been placed on desk duty pending the results of a full investigation, but you sadly expect them to get away with this hook, line and sinker, such is the current climate in America surrounding police shootings of black people. Let’s hope that changes soon.

For a story that might cheer you up (seriously), check out what happened when this cop pulled over a black guy who was speeding. They’re not all assholes.