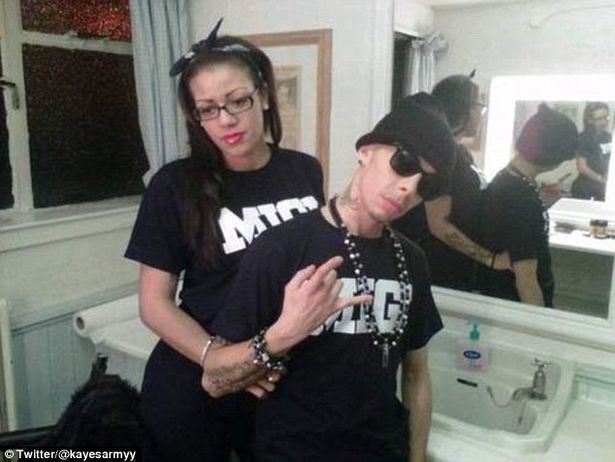 The Coronavirus pandemic is making a lot of people do a lot fo crazy things, but I’m not sure if many of them are as nuts as what the ex girlfriend of Dappy and mother of his two children has become mixed up in.

To be fair, 29 year old Kaye Vassell’s sutaiton probably developed before the pandemic hit in but it does mean that she’s stuck in St Louis without her children for the foreseeable future which can’t be that good. You see, Kaye decided to move over to the American city to be closer to her fiancee, who she became engaged to recently after two months of communication, despite the fact that she’s never met him and he’s serving life in prison for a triple murder. Sounds like a great idea right?

Deandra Buchanan (below) and Kaye became involved with each other after she wrote to him after seeing him on the Netflix show ‘I Am A Killer’, after he shot his girlfriend, aunt and stepfather at a party back in 2000. He claims he suffered a psychotic episode after smoking a ‘spiked’ joint. Possible I suppose.

I was just intrigued by the story.

I didn’t expect it, but he got back strict away.

It was five or six letters before I gave him my number. We speak on the phone up to three times a day.

I get how people might think, ‘She’s crazy, what is she doing?’

But once you talk to him and know his heart, you understand that he is not a bad person.

I mean sure that’s possible, but you’ve gotta be kinda crazy to become engaged too someone two months after you meet them, let alone two months of talking to them on the phone when they’re a convicted killer. Each to their own though I suppose.

I always wonder what these guys manage to do when they’re talking on the phone from jail three times a day because it’s not like they’re going to have anything to talk about because they’re sat in jail doing fuck all and living the most boring life ever – how is that enough to entice a woman on the outside to commit their life to you? Must have some damn good game right there hey considering I can’t even get a date most of the time. Really confusing but I guess kinda inspirational as well?

Dappy himself hasn’t commented on the situation yet but it’s understood that his two kids are still in the UK and haven’t travelled over to Missouri with Kaye. Probably good news.

For more of the same, check out Dappy sending ruthless DMs to a fan calling her a slag. Nothing gets past him.