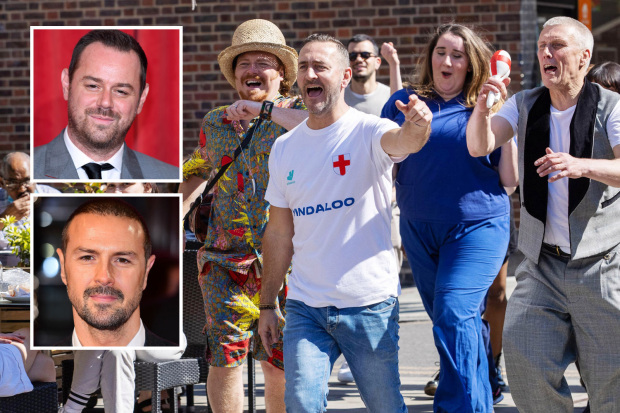 Did anyone want this?

When it comes to football songs, we all know that Three Lions is the biggest and best out there but Fat Les’s ‘Vindaloo’ definitely has a place at the top table, so it’s kind of surprising that Paddy McGuinness and Danny Dyer have announced that they’re going to be releasing a new version of the classic track.

The pair have recorded the updated version of the song and Coronation Street actor Will Mellor, Celebrity Juice‘s Leigh Francis and Madchester legend Bez of the Happy Mondays were spotted shooting a video for it in East London a couple of weeks ago. Here’s what an inside source had to say about the new song:

Danny and Paddy are secret stars of the ‘Vindaloo’ re-recording.

They laid down their lyrics in a studio at the end of last month but their schedules couldn’t allow them to make filming. But it’s obvious who sings what lines in the track and the new version sounds brilliant.

The video for the updated version is very much in line with the original.

Everyone involved in the remake thinks it will blow the original out of the water. It’s brilliant fun.

Yeah I’m not really sure if that’s actually going to be good, but I’ll definitely give it a listen whenever it drops. Unfortunately a release date hasn’t yet been confirmed for the song, but they’ve gotta bring it out sometime this week really haven’t they, so it won’t be too long until we’re hearing it. I’m not gonna say I can’t wait, but I’m definitely interested in seeing what happens.

For more of the same, check out this Danny Dyer soundboard with all of his favourite phrases on it. Awesome.