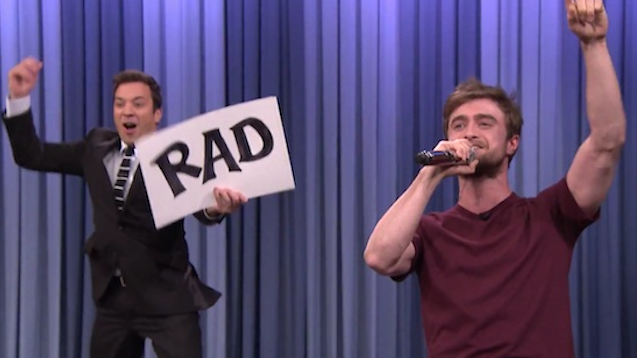 Daniel Radcliffe is apparently a big rap fan so Jimmy Fallon decided to call him out on it.

Daniel Radcliffe has desperately been trying to shed his image as Harry Potter pretty much ever since he hit puberty, and to be fair to the guy it’s nowhere near as much of a train wreck as it could have been.

Daniel attempted to continue his rebranding as a cool dude last night on Jimmy Fallon when Jimmy called him out on his alleged love of hip hop – apparently Daniel has been a big Eminem fan even before he was in Harry Potter (whether that makes you a hip hop fan we’re not sure) – and challenged him to rap Blackalicious’ ‘Alphabet Aerobics’.

In case you haven’t heard it before, it’s a real tongue twister that only somebody that actually had some experience in rapping would be able to even think about performing, so it would seem like a little pipsqueak runt like Daniel Radcliffe had no real chance with it at all, although perhaps more chance than the self proclaimed worst rappers of all time.

But guess what? To everyone’s surprise Radcliffe actually completely and utterly nails it, so much so that the studio audience give him a standing ovation which hardly ever happens. Maybe one day people will think of him as a cool guy and he’ll shake off that Harry Potter tag, I’ve got a feeling that it’ll be a long time though if it does ever happen.