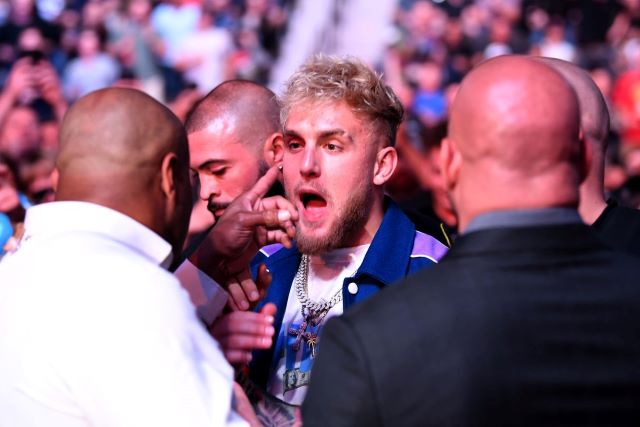 The other week, Jake Paul gave a cringey interview in which he challenged UFC legend Daniel Cormier to a fight and threatened to beat him up, which I’m not sure even he believes he is capable of, even with DC retired at 42 years of age.

Well during one of the earlier fights at UFC 261 last night, Jake Paul and his crew walked into the crowd prompting thunderous chants of “F*ck Jake Paul”. As soon as Cormier realised, he got up from the commentator’s table and went over to confront him:

Here’s a better look at it on Jake Paul’s Twitter:

Wow – there’s just no way Jake Paul expected Cormier to abandon his commentary duties and walk right up in his face like that. I’d love to know what he was saying to him, especially considering what he said once he was back at his table:

Daniel Cormier isn’t playing when it comes to Jake Paul

Gotta love Daniel Cormier. As if he’s going to let some punk off YouTube disrespect him like that, especially one who – despite having some boxing kill – hasn’t beaten or fought anyone legit (discounting Ben Askren since he was primarily a wrestler and looked as though he didn’t even train for the fight).

Who knows? Maybe Jake Paul & DC will actually get it on in the near future and this was just a good way to build hype for it. No chance Jake Paul lasts longer than one round, right?

For a look at Ben Askren ‘explaining’ why he lost to Jake Paul, click HERE.