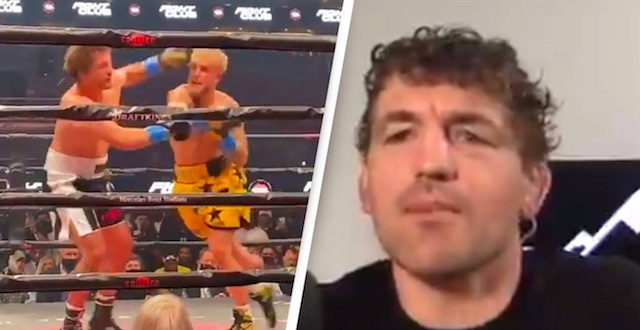 It’s only just been 48 hours since Ben Askren was knocked out by Jake Paul and he’s already doing that part of the post-match analysis where he explains why he lost and how if he ever gets another chance then the result of the right will be completely different. You love to see it.

Askren was speaking to Steve Crowder on the ‘Louder Than Crowder’ podcast where he explained the following:

In an LwC EXCLUSIVE, @BenAsken explains what went wrong in the Jake Paul fight. pic.twitter.com/uXHAEYLZIi

Some people are just like… they don’t think I took it seriously.

I was quite explicit about doing it for the money and thought it would be a good time after boxing with friends in high school.

I trained hard for 11 weeks, I didn’t miss a practice and it just didn’t go my way.

We knew he had a good overhand right and I’m a dumbass and didn’t block it.

My defence was a little loose and I didn’t stop reacting to Paul’s fakes. I paid the price.

I think one of the things that really separates me from a lot of people is I could have very easily sat on my couch and said… I don’t wanna do that because there’s a potential I’ll be embarrassed.

OK so maybe Askren didn’t say it would be different if they went again, but he’s still coming up with a few excuses there isn’t he? I guess the main thing though is that he did say he was mainly doing it for the money quite a few times and did only train for 11 weeks beforehand after sitting up on the couch for the past two years with his feet up, so it seems fairly obvious in hindsight that he probably wasn’t going to have too much of a chance. Hopefully nobody lost too much money betting on him too hard.

For more of the same, check out how much money Dana White bet on Ben Askren at the weekend. Looks like someone really did lose out, but I guess if you’re a billionaire it’s not that bad.