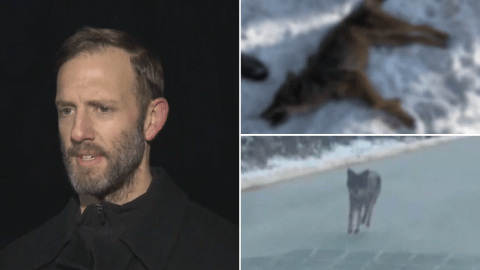 A badass dad in Kensington, New Hampshire, has strangled a coyote to death with his bare hands after it attacked his two-year-old son.

Ian O’Reilly told CNN that he had “never harmed an animal so it was a weird experience”, but upon seeing the animal grab his son by the hood of his jacket and drag him to the floor, the dad went into ‘protection mode’.

The coyote bit Ian twice as he tried to fend it off, and he eventually kicked it away and used his body weight to suffocate it while holding its snout shut.

Ian says it took him about 10 minutes to kill the animal:

I was able to get its head into the snow and get my hand around its snout, so it could no longer bite me.

And then, from there, I was able to suffocate it by using my body weight and scissor-locking it until basically expiring

What a legend. That coyote should have known you do not mess with a man who would do anything to protect his children. Ian O’Reilly saw a predator attacking his two-year-old and what did he do? He out-predator’d the predator and literally squeezed all the air out of that coyote’s lungs. Father of the year contender right there and it’s only January.

P.S. I wonder if his kid was sat there watching the whole time his dad murdered that coyote? He says it took 10 minutes to kill the thing which is long enough to burn nice and deep inside that 2-year-old subconscious mind. I don’t know if this means he will turn into a serial killer/animal torturer later in life but let’s hope not.

On the other side of the dad spectrum, meet the Florida dad who lobbed his 5-year-old into the ocean to ‘teach him how to swim’.