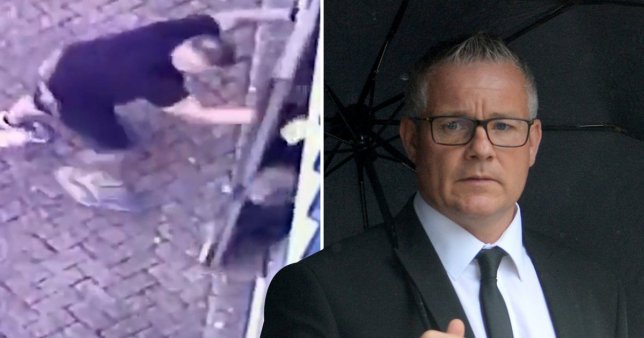 A man who was caught on CCTV fly-kicking a door shut on a football steward’s head has been banned from attending all future football matches in England and Wales.

The crazy part is David Morgan, 48, was bonding with his teenage son on a boy’s day out, seeing him for the first time since splitting with his mum two months earlier.

He took his son to the Huddersfield Vs Cardiff City match and thought, what better way to show my son how cool I am than by crushing another man’s head in a door:

According to Metro the steward was left ‘bleeding and concussed’ while train company worker David was arrested.

Apparently he was blackout drunk during the incident and was shocked when he saw the footage as he couldn’t remember any of it.

It was the first time in two months he had met with his son.

Another supporter started arguing with his son. He then started to defend him.

He accepts that he was acting aggressively. He didn’t go out to assault anyone.

He is worried his son won’t look up to him as the father he needs to be. He is still very much upset about the incident and is undergoing counselling.

Welp, not the best start for David and the father/son dynamic post-divorce. Not really ideal when you’re taking your boy to the football and end up getting blackout drunk and arrested for kicking someone’s head in.

Like his lawyer says though he’s in counselling now so hopefully things can only improve from here.

For more dad of the year contenders, get a load of the man who threw his 5-year-old into the ocean to ‘teach him how to swim‘. Florida.