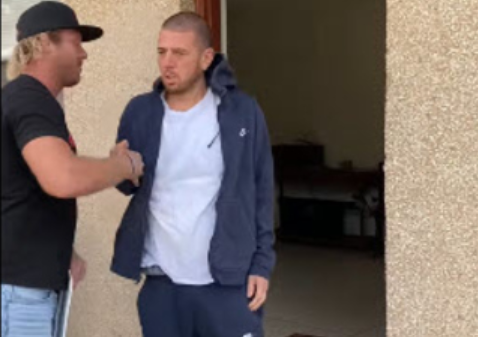 This is cringe on so many levels.

A 36-year-old unsigned rapper is set to become a 36-year-old registered sex offender after he was set up and exposed in a ‘Catch A Predator’ style clip from an amateur paedophile hunter.

Jacksonville rapper Christopher Martini AKA DaChef was allegedly sexting a 14-year-old girl, who I guess was actually the video’s host in disguise. The way he sets him up is absolutely brutal – showing up to his front door and pretending to be a record exec who wants to give him a massive cheque, making him spit the word’s worst freestyle, and then revealing the truth with his own rap lyric:

God how awful was that freestyle? Almost spat my drink out at the host’s though:

My name is Nate Waits and i created a list, you are on that list because you tried to fuck kids.

The really tragic part is it seemed like the unsigned rapper sensed that something wasn’t quite right as he basically had one foot back inside the door the entire time. But he just had to roll with it on the 0.1% chance that this Dolph Ziggler lookalike was really a record producer who wanted to make him rich. Nope – just some guy who makes paedophile hunter videos on YouTube. You can check out more from his channel here.

For the video of a man dressed in Batman pyjamas being confronted by paedophile hunters, click HERE.