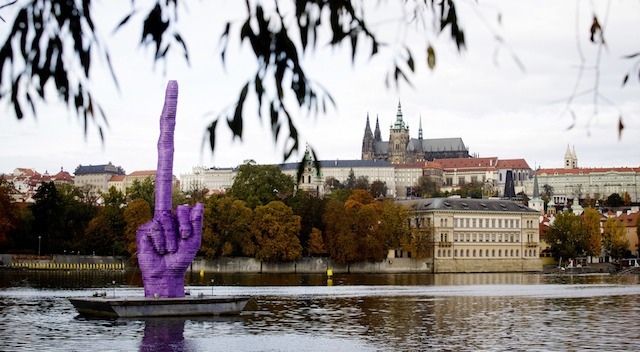 This is definitely one way to get your point across.

Yesterday morning, Czech sculptor David Cerny unveiled a new sculpture in the Vlatva river in Prague on a grounded bridge in between the Legion and the Charles Bridge.

It’s pretty much just a giant hand – with a particularly huge and disproportionate middle finger – making the up yours sign at the Prague castle which is the current seat of President Milos Zeman and is obviously a non too subtle criticism of Zeman’s current policies and leftist tendencies. The protest also comes before general elections this weekend in the Czech Republic which could see the Communist Party make significant gains for the first time since the fall of Communism 20 years ago, which is obviously a concern for many in the region including Cerny.

It’s unclear how long the statue will stay in place – shipping authorities have said it has not been placed in any lanes that will affect shipping routes and Cerny himself has been quoted as saying the length of its stay isn’t important and that what is important is where the middle finger is pointing. Straight to the point, this guy. President Zeman is currently on a visit to the Ukraine and has stated that he can’t comment on the sculpture until he sees it in person, which is kind of stupid considering there are a bunch of videos on the internet of it which would make it fairly easy for him to see exactly what it looks like. Still, I guess he has to be diplomatic in these situations, like any good politician would be.

Czech politics have been in turmoil for weeks over the summer, with former President Petr Necas’ government collapsing in June amid a bribery scandal and a new government of technocrats led by President Zeman coming to power in July and swiftly dissolving in August, paving the way for the upcoming elections this weekend.

â˜› Read Next: Triphalangeal Thumbs – The Hands With Five Fingers