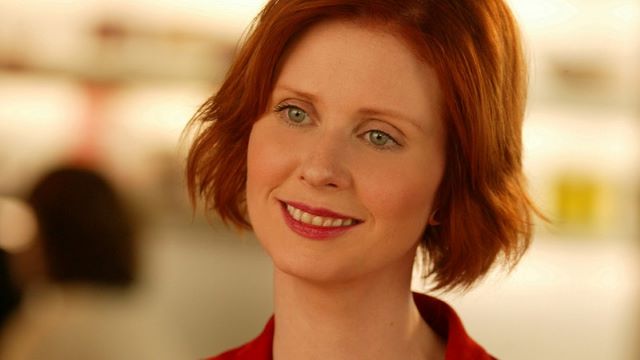 What a novel idea.

Cynthia Nixon AKA Miranda Hobbes from ‘Sex and the City’ has caught a bit of flak for her, um, interesting take on how stores like CVS should deal with shoplifters.

According to Cynthia, who BTW ran for governor of New York a few years back, stores like CVS should just let people steal their goods rather than making said goods difficult to steal:

The CVS on my corner has started locking up basic items like clothing detergent.

As so many families can’t make ends meet right now, I can’t imagine thinking that the way to solve the problem of people stealing basic necessities out of desperation is to prosecute them. https://t.co/5RsdMTDWqa

Hmm, pretty novel idea from someone who became famous by acting in a show about rich women who spend all day in designer clothes and carrying handbags that cost more than most people’s cars.

I grew up poor, and we never took anything that we hadn’t paid for. It’s insulting that you think the less fortunate have no ability to discern right from wrong. Also, allowing widespread theft will result in higher prices, punishing the poor and honest.

Well Cynthia, why don’t you go down to the CVS on your corner and simply buy these items from the store. Then set up a table outside the door with the items available for anyone to take, for free. Then you can directly help these families you are so troubled about.

And what will you do when the CVS closes?

Hi Cynthia. My name is Vince. I would appreciate it if you can post your address. I need some basic necessities and I figured you might have them in your home. If it’s OK, I’d like to come and get them this evening

Welp, we’ll give Miranda some credit – at least she was thinking outside the box. Crime is up 30% in New York (robbery alone is up 70%), and so what better way to deal with that than to make stealing things legal? Boom – crime is reduced. Problem solved!

I do get what she’s trying to say though – that prosecuting poor people for stealing is akin to criminalising poverty. Except when CVS and other shops lock up basic items like clothing detergent, it’s really just about criminalising crime. As some of the Tweets directed at her suggest, just allowing people to walk out the door with all the basic necessities they need isn’t really ideal when you’re a retailer trying to stay in business.

Still, maybe Cynthia can run with the basic premise of that idea to see if it works. There must be loads of ‘basic necessities’ laying around in her $3.2 million New York home that many poor families could use. Why is she locking them up inside her home? Just let people in and have them take what they need. Be the change you want to see in the world.

To watch a shoplifter in Romania get taught a brutal lesson after being caught trying to steal some booze, click HERE. See? Could be worse.