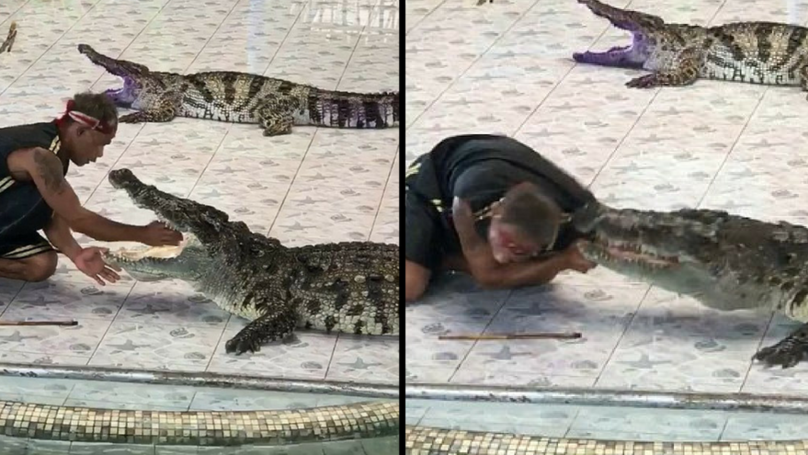 Whenever I see someone who work with dangerous animals on the reg I always figure that they must have a deathwish because things could easily go wrong very quickly and they would be absolutely screwed, but then they always seem so calm and chill and confident that it doesn’t seem like they’re ever going to get hurt. But then I see something like this and really that I was right all along.

We’re over in Thailand at the Phokkathara Crocodile Farm and Zoo in Chiang Rai for this one, where 45 year old crocodile handler Tao was performing in front of around 100 people on Sunday afternoon. His party piece was sticking his whole arm down a crocodile’s throat and well, you can kind of guess how this one went down.

This is pretty shocking/disturbing stuff so if you’re not up for seeing a crocodile almost bite someone’s arm completely off then don’t watch it, yeah:

Jesus Christ. Just waiting for that chomp to come when you knew it was on its way had me looking at the screen through my fingers. Scary stuff.

Why in the hell did that happen this time when Tao has probably done this millions of times? Hope his arm gets sorted and he can continue his career but man, I would be pretty screwed if that happened to me and I was a crocodile handler as I don’t think I would ever go near one ever again.

Khun Phusawit – who recorded the incident – said the following about it:

The show was very good until that happened. I hope that the may is okay and he gets better soon.

Everybody was shocked when it happened. The kids were a little bit scared.

I’ve watched the clip back many times to see how it happened and the crocodile seems not to like having the hand in his mouth.

I mean yeah, great observation there Sherlock. Maybe you should become a detective or something. Doubt anyone could have figured that one out themselves.

For more crocodiles, check out this 80 year old crocodile catching and eating a shark. Badass.