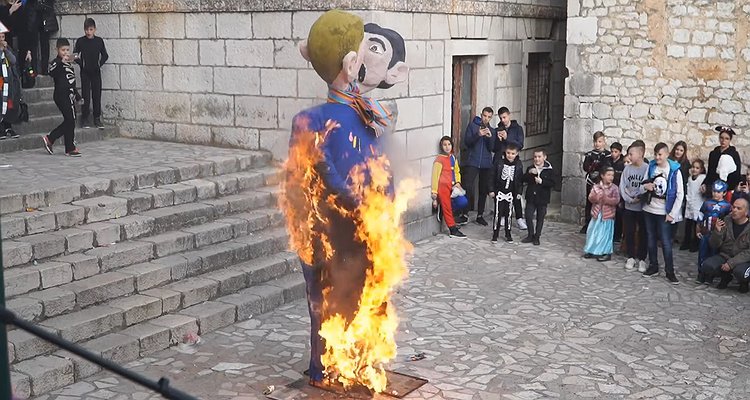 Just when you think that we’re making a mark on the world with progressivism in terms of LGBTQ rights, then a video like the one below turns up that proves to you that some places in the world are still living in the stone age.

The video comes from the town of Imotski in Croatia and is a direct reaction to left-wing Social Democratic Party MP Nenad Stazić, who recently called for same sex couples to be able to foster children in the country. The town decided to parade a huge effigy of a gay couple kissing with a doll baring Stazić’s face through the whole place before setting it on fire as an announcer said the following:

My head is spinning from this culture of death… This year, let’s set this grotesque family with baby Nenad Stazić on fire!

The crowd – which included women and children – then danced around and cheered as it went up in flames. If you wanna check out the grotesque footage, the video is below – hopefully I don’t need to explain to you what is wrong with this:

Terrifyingly backward. Thankfully the President of Crotia has condemned this activity with a lengthy Facebook post saying the following:

The symbolic burning of the same-sex couple with a child in Imotski is inhumane, unpleasant and totally unacceptable under the cover of the carnival celebrations.

Hatred for others, intolerance and inhumanity are not and will never be a Croatian tradition.

I will be monitoring the response of our public institutions, especially since [the burning] was watched by many children who witnessed the spread of hate and incitement to violence.

That sounds good, but I don’t really think most of Croatia is listening. They imposed a ban on gay marriage in 2013 with 66% of the country backing the vote and although gay couples can enter into a civil partnership and discrimination on the grounds of sexual or gender identity is banned, the fact that stuff like what’s going on in that video is still happening gives you a pretty good impression of what’s going on there. Sadly can’t really see it changing any time soon either.

For more of the same, check out this woman who wants to marry a dog now that her ex husband has died. He was a cat.