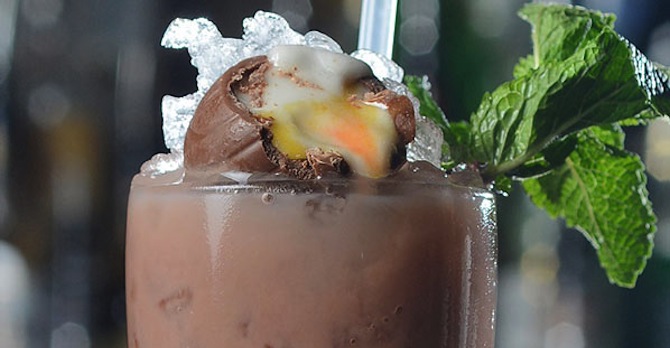 A brand-new cocktail has hit the streets: Creme Egg mojito. What do you think? Is this the best cocktail ever?

Everyone loves cocktails, unless you’re straight edge. There’s something about cocktails that make you feel so much more important than you really are when you’ve got your claws grasped around one and you pretend you’ve got a pretty high-flying job, like a leaflet distributor, instead of the really shitty, boring, self-deprecating 9-5 you turn up to. You’ve got a confident buzz on and you lie to girls when you’re trying to chirpse them and it’s all going well until you bump into your boss and he asks you if you filed all that paperwork for him, like he asked, and you give him the doe eyes and say: ‘yes, oh almighty coffee-breathed one, I filed everything in tedious alphabetical order’ and he nods and walks away and the girl asks ‘what was that all about?’ and you have nothing to say anymore so you crawl back into your hole at the darkest part of the bar and get another four cocktails in before happy-hour is up and leer at the girl who’s now surrounded by Henley dickheads.

â˜› More People In The Pub: “Get Outta My Pab!” Punter Stereotypes I’d Like To Dropkick

So, it’s confirmed that if you like to enjoy life, you love cocktails. It’s pretty much a no-brainer. The sweet, sweet sour calm and the refreshing fruity buzz and the frostily-cold glasses can’t be compared to the flat, rusty, insipid lager that gives you the shits in the morning. One of my favourite cocktails is Kraken Sunrise. It consists of: 1 oz Kraken Spiced Rum, ½ oz Blue Curacao, 2 ½ oz Grapefruit Juice and ½ oz Guava Juice. Pour it over the rocks and add a slice of lime. I haven’t seen it in bars around here and I first tried it in Spain; you might think it sounds like a pussy’s drink but it’s awesome and pisses all over your drink of choice. Get your hands on one somehow.

But there’s a new dude on the block that might change my opinion. And that doesn’t happen very often but the potential here is insane. Its name: Creme Egg Mojito. Especially made for Easter. It was created by Jack Williams, who’s the head mixologist (cool job) at Late Night London, for London’s Jewel Bar. It’s made up of:

And this is how Jack made it:

‘Bruise the mint sprig and put it in the bottom of the glass along with the rum and chocolate liqueur. Next add the sugar syrup and lime juice to the mix, then some crushed ice and smashed up chocolate egg and give it all a stir. Top with a little more crushed ice and a dash of soda on top. Serve with an oozy half of Cadbury’s Creme Egg.’ 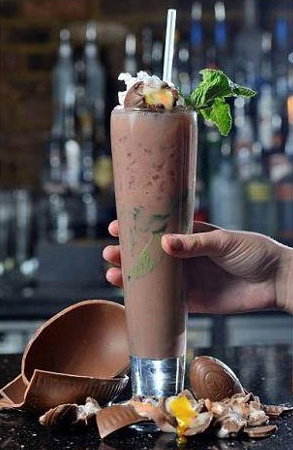 However, if you’re a fatty and are verging on a heart-attack or you’re one of those who count every calorie in drinks/food then this might not be for you because it contains 987 calories. I suppose you pay for life’s riches.

Even though it contains that many calories, it’s ‘surprisingly light’ – according to the bar – but that’s probably just a really slick promotion technique because I can’t imagine how anything that contains 987 calories can in any way be ‘light’. If you do fancy seeing if it’s actually ‘surprisingly light’ then head down to the Jewel Bar in Piccadilly Circus, London, and the cocktail will be served Thursday, Saturday and Sunday over the Easter break – at a not-too-shabby price of £8.50. If Jewel wanna send a sampler over to Sick Chirpse, we won’t complain. 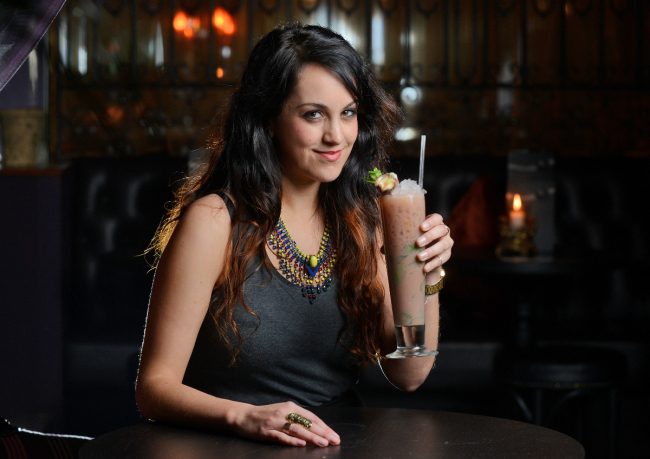