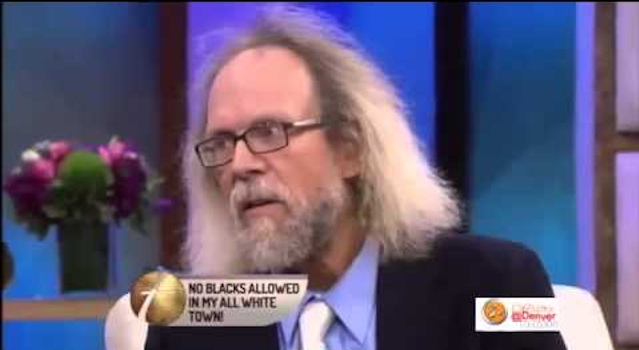 Another day, another racist white supremacist made to look like even more of a complete douchebag.

You have just got to love moments like this when closed minded bigots get a taste of their own medicine and have absolutely no retort for it and actually look as stupid as everyone thinks they do. Unfortunately it wasn’t Russell Brand or some obnoxious American chat show host though this time – we’ve got to make do with Trisha Goddard, but she did manage to pull if off fairly convincingly.

The white supremacist in question is some idiot called Craig Cobb who is a notorious Neo-Nazi who is wanted in Canada for hate crimes and is perhaps best known to the public for trying to build a whites only enclave in North Dakota called Cobbsville, which was fortunately thwarted by the local council. It’s unclear why he was appearing on this episode of Trisha – which will air on November 18th – other than it’s part of a series of episodes discussing issues of race in America, which sounds vaguely more interesting than the usual trash that is on her show.

For some reason Cobb voluntarily agreed to take a DNA test and this clip kicks in with Trisha telling him that he’s 86% European and 14% Sub Saharan and Cobb just has no idea how to react, saying that it’s just ‘statistical noise’. Trisha completely rinses him though and is actually pretty cool, offering him a fist bump and calling him bro. Of course, Cobb physically recoils at this and then offers the statement that ‘blood and oil don’t mix’. Dickhead.

Following on from the segment, Cobb explained that he agreed to the test because it was science, but following the results he realised that it was a ‘scientifically bankrupt procedure intended only to shock’. Of course he did. Following on from that, when asked how he would react if a test he deemed legitimate repeated the results he said ‘well if I did have any nigger we don’t want anymore of it’, which doesn’t really mean anything and just makes him look like even more of a racist idiot.