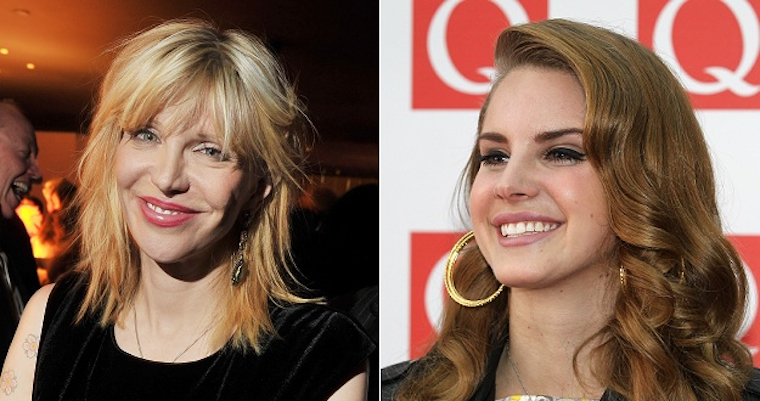 The headline says it all really huh?

Lana Del Rey is kind of cool. I don’t really know much about her except the songs I have heard by her are total hits and that she had that cool song about video games. I also knew that Sick Chirpse ran a feature on Lana Del Rey way before she got famous, which makes me think we should really get a dedicated music section or at least deal with music a lot more than we do now. Any thoughts? Anyway, the point is I’ve only heard a couple of her songs but they seem like hits – not on a Carly Rae Jepsen level sure, but definitely hits – and despite some controversy over whether she writes her own songs or not I’m backing her. However, I wasn’t really prepared for the random beef that was going to occur between her and Courtney Love following her decision to cover Nirvana’s ‘Heart Shaped Box.’

Now, on the face of it being Lana Del Rey and covering a slow, gloomy Nirvana song doesn’t seem to be that ridiculous decision and I’m sure that most people had the same reaction as I did when I found out: ‘I guess that’s kind of cool. Maybe I’ll check it out’ Everyone except for Courtney Love though that is. Upon hearing of Lana’s decision, Courtney Love – who has been known to go crazy on twitter before, for example when she posted a bunch of tweets about Dave Grohl being in love with her and trying to fvck her daughter – took to the twittersphere to contact her about the true meaning of the song. She also decided to CC in Bryan Adams for reasons I’m not quite sure about. The tweets have now been deleted but here’s what they said:

‘You do know the song is about my Vagina right? ‘Throw down your umbilical noose so i can climb right back, umm… On top of which some of the lyrics about my vagina I contributed. So umm next time you sing it, think about my vagina will you? lol xc’

Courtney Love was clearly drunk tweeting. Again. Which isn’t really that surprising but you would really think that the amount of times she’s had to delete her tweets because she’s been being a dickhead to someone or just completely outrageous. You think she would have learned her lesson by now. However, it’s pretty awesome to know that Heart Shaped Box is about her vagina, and also pretty awesome because Courtney Love being stupid makes for great news, so we should probably thank her for that. I should probably start following her on twitter too so I can be at the forefront with this kind of stuff.

Later on Courtney Love appeared to repent about her earlier tweets, tweeting Lana Del Rey the following: ‘You are gorgeous and very talented, it was all in good humor love, it is true however bwahaa xc.’ Lana Del Rey has, pretty sensibly, refused to reply to any of these tweets. She probably didn’t even see them to be honest – Lana Del Rey has over 800,000 followers whereas Courtney Love has only 80,000. Says it all really. Keep going for it Courtney, one day maybe you’ll get it back.