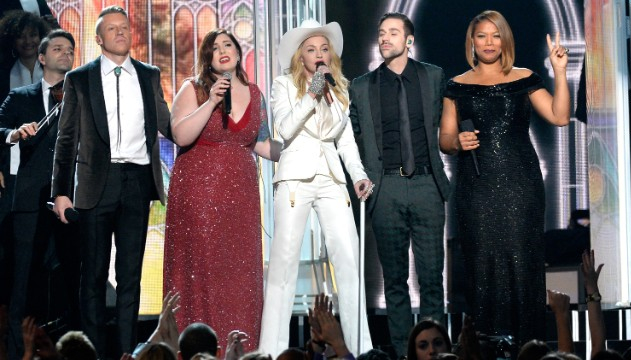 Both heterosexual and homosexual couples got married during Macklemore’s performance at the Grammys to really ram home the message behind his song Same Love.

Macklemore and Ryan Lewis managed to pick up 4 Grammys last night but everyone is talking about their performance of ‘Same Love’ from the show rather than their actual success on the night. This is because during it, 34 couples – both heterosexual and homosexual – got married by Queen Latifah right there and then at the Grammys and it was a pretty beautiful sight that really helped ram home the message of the song.

Of course, Madonna kinda screwed it up just by being Madonna and coming out and singing the last chorus, but Perez Hilton said it was every gay man’s dream to have her sing at their wedding so hopefully at least some of the queer couples enjoyed it. Despite that day, it was still an inspirational and heartwarming moment.