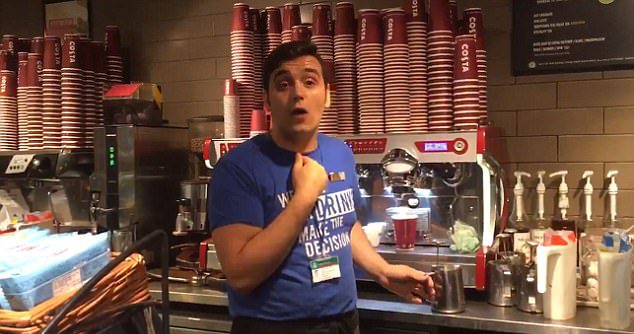 A Costa customer was turned down buying food from a barista as it was meant for a homeless man.

Adrian Pinsent has now branded the incident a ‘disgrace’ after attempting to purchase a sandwich and soft drink at the shop in London’s Waterloo station.

In the footage, a barista says that the company could be prosecuted by station security:

That is complete and utter bulls**t. How can they get prosecuted for allowing a customer to buy food – who cares who the food is for?

Pinsent, a TV cameraman from Walton-on-Thames, told the Press Association:

It was an utter disgrace.

I asked (the homeless man) to pick what he wanted, a sarnie and a Pepsi, and when I tried to pay for it, they refused.

This argument went on for some time before I filmed the video.

I was amazed. As a cameraman and journalist myself, I know that the idea of Costa being prosecuted by either the police or station security as the barista says is utterly wrong.

A spokeswoman for Costa said:

We do not have a policy that restricts customers purchasing food for anyone who is homeless.

So basically those smug baristas behind the counter were acting like a-holes for no reason. I hope they have to sleep on the streets one day and know what it’s like to face rejection like they gave every single day. Truly awful behaviour.

I wish people could be more like dogs – check out this pup who dragged her new blanket outside to share with a homeless dog. Too cute.