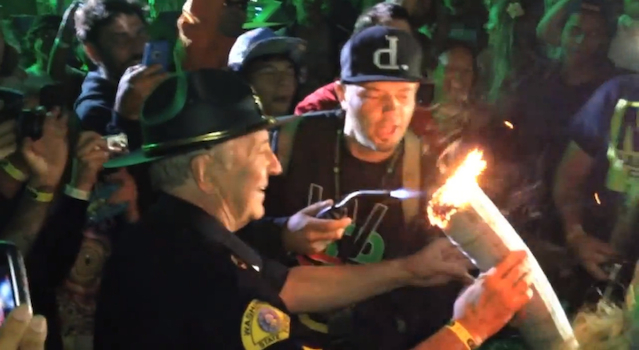 Two years ago this photograph and video would have been unthinkable. Thankfully that’s no longer the case.

If I would have showed you this picture two years ago you would have sworn it was fake or photoshopped. But now it’s stone cold reality and it looks real good – if you can see it through those bloodshot eyes that is.

As many of you know, last year as part of the Presidential Election Washington State and Colorado both decriminalised the use of marijuana and voted to make it legal in each of their states, which was seen as a massive step forward in terms of progressive politics. Since then I’m fairly sure that both states have deemed that the law has been a success and it’s hoped that other states will eventually follow suit. As such, in Washington and Colorado cops don’t go around confiscating little bags of weed and being assholes to stoner kids trying to buy snacks at the grocery store but instead they’re helping them out, as you can see in the picture above and the video below.

There was an event up in Washington called the NW Harvest Fest where basically a bunch of stoners go to some fields for a weekend and get really baked and have inane conversations with each other. To celebrate the festival, some of these stoners decided to roll a joint that had two pounds of weed in it. To put that in perspective that’s about 25o times an eighth. It’s pretty clear that some serious stoners were headed to this festival.

In true time honoured stoner tradition though, they hadn’t actually thought about how the hell they were going to light it. Not only did they probably lose their lighters somewhere, but a conventional lighter simply wasn’t going to cut it because it was such a huge joint.  This cop kindly provided a blow torch for this purpose and held the joint up whilst some guy in a baseball cap and a hoodie lit her up. He then helped blow on it for a while to get her burning. There’s also some kind of stoner psychedelic band playing in the background which makes the whole scene even more of a cliche, but hey, I love it and you will too.

Apparently the joint was smoked to completion which sounds like a particularly tough task, but once you’ve seen the calibre of people in this video you’ll realise it probably wasn’t that hard at all.

â˜› How The Times Change: Biggest Ever Joint Confiscated By Police