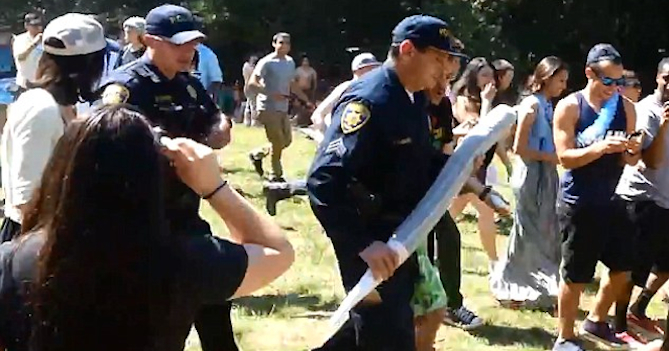 If you spent $6000 rolling the biggest joint ever, then you’re probably going to be really annoyed when the cops confiscate it before you’ve even got to light it.

I don’t know what you were doing on Saturday but I was in Hyde Park getting baked and celebrating 4/20. Then me and my friends decided to go and find some food but none of us could make a decision or figure out where we should be going or anything so we just wandered around central London for about two hours getting lost loads and not getting any closer to getting any food. But then we got a Bodean’s and I got a free shot with my Bodean’s card and it was awesome. YOLO.

Anyway, as good as my 4/20 was I didn’t do anything anywhere near as cool as these students over in Santa Cruz. They did the standard thing of going to the park and skinning up and getting baked, but this one dude took it the absolute next level by deciding to roll the biggest joint ever. And by biggest joint ever I literally mean that. It had 2 POUNDS of weed in it, you know? That’s probably more weed than I’ve smoked in the last five years. Apparently it was worth about $6000, depending on who your dealer is. That’s a lot of weed to put in one joint dude. But then I guess it is 4/20 and you gotta celebrate in style.

I don’t know if this dude was seriously planning to smoke that much weed or just share it around and HOPE that they could get through it all but he didn’t get the chance because some buzzkill cops came over and confiscated the joint. Normally I would say that this is bullshit but to be fair to the cop, possession of that much weed in California that isn’t for personal use (I’m not sure if the defence that it was all in one joint that he was planning to smoke on his own would actually work) could lead to a lengthy jail sentence so I guess it was quite safe of the guy just to confiscate it and not arrest the dude.

To be honest though it’s still bullshit because it’s 4/20, the one day of the year when stoners are allowed to smoke weed in peace and not be bothered by the authorities. However, for everyone else it’s definitely a good thing because the picture of the cop carting the world’s largest joint away is pretty hilarious. Also – although it sounds like the dumbest comment ever when you’ve got the largest joint in history which is probably going to draw some attention – the guy could probably have been a bit more discreet about it because he set up a huge booth to unveil it to all the stoners hanging out in the park. I mean if rolling the biggest joint in history wasn’t asking for trouble and drawing attention to yourself committing a massive felong then that definitely was.

I also really like this guy’s attempts at arguing with the cops, and the fact that he’s threatening to take the cop to court for confiscating his joint?! Er hello Mcfly, that kinda case isn’t gonna fly anywhere, not even in SoCal. Even on 4/20 when you’re baked out of your skull you should be able to realise that. Here’s a video of it in action, just listen to this idiot talking. I threw in a couple more pictures of the cop carrying the joint below too because they really cracked me up, I mean it’s like he’s carrying a rifle or something but instead it’s a massive joint.