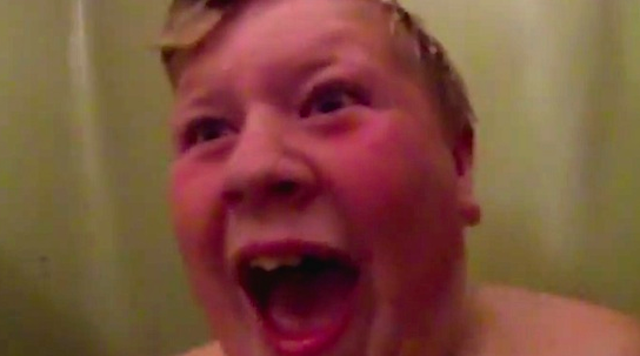 Maybe even in the literal sense.

Pranks are the best, and it must be extra specially cool when you prank your chubby little kid when he’s in the shower singing like an idiot because he probably doesn’t even know that much about pranks so will be genuinely terrified when you get him.

And that’s exactly what this dad did with this prank and what’s better was that it was a double prank, although it isn’t quite as good as the best prank ever. The kid was in the shower singing some really lame song when his dad put on a gas mask and then poured some cold water over the top of the shower onto him.

Just after he’d finished screaming like a little girl, the dad opened the shower door and exposed him to the frankly terrifying image of him wearing a super creepy gas mask. The kid’s only reaction – to scream even more like a little girl and fall over in the shower (?).

You might think this is cruel but I just think it’s hilarious, and in any case this little cream cracker needs to toughen up before he goes out into the real world and tries to be a man if he’s screaming over stuff like this. Tough love is sometimes the best kind.