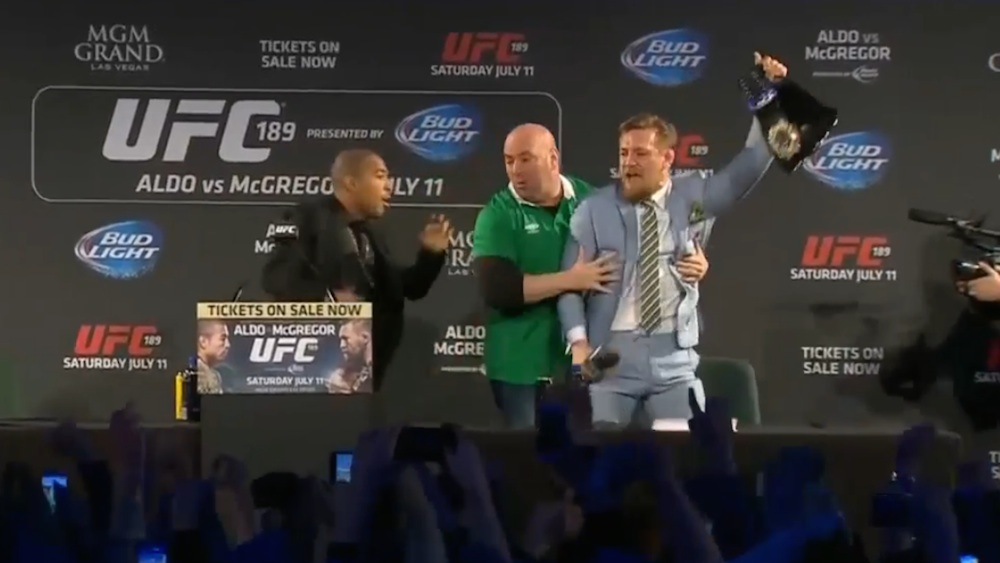 The ultimate show of disrespect.

Jose Aldo and Conor McGregor aren’t set to fight each other until July 11th at UFC 189 in Las Vegas, but that hasn’t stopped them from getting the hype train firmly on the track during their recent round the world UFC tour to promote it.

The last stop was yesterday in Dublin and Conor really wanted to give his native country something special, and so during his usual trash talking he went straight over to Aldo and stole his belt off him right there on the table, indicating what he was going to do to him when July 11th rolled around. Of course, this almost ended up in a fight between the two and UFC President Dana White had to get in between them both to sort it out.

It seems like the two genuinely hate each other as UFC seems to be turning more into WWE in terms of promos, and it’s definitely got us pumped up for their match, even if it is about three months away. No doubt there will be a lot more hype in the meantime, but I’m not really sure how McGregor can top this stunt.

Conor McGregor seems to be well on his way to becoming a superstar with his recent documentary about his obsession with movement and fly on the wall documentary, but let’s not forget that he’s only 5 – 0 in UFC and hasn’t really fought anyone of note yet. This fight against Aldo is going to make or break him, and with all the hijinks he’s getting up to before it, he had better win it or he’s going to be a laughing stock afterwards. We’ll see come July 11th I suppose.