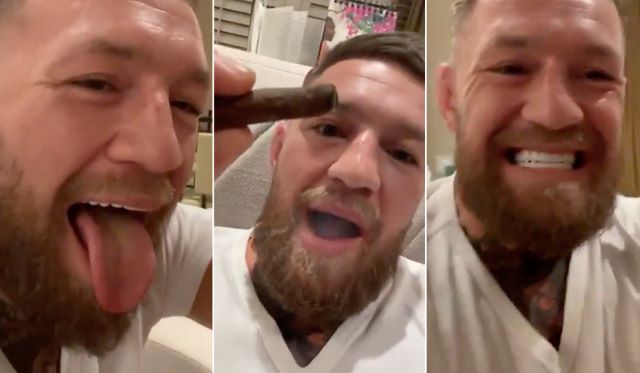 If you think Conor McGregor’s ankle is the only thing he can roll, then get a load of this clip he put up on his IG Story the other night, getting blazed off his face while pulling wacky faces and marveling at how thick his neck has gotten.

What a class act, lad. A fine example to us all. A lot of the comments around this video seem to be showing concern for Conor, who people believe is headed for a Charlie Sheen-style meltdown now that he realises his fighting career (or his peak at least) is basically over. Then again all he’s doing is smoking a bit of weed and he’s always shotgunned these crazy attention seeking things on social media to keep people talking about him, so maybe it’s not too far out of the ordinary for him.

All in all, at least he didn’t threaten to kill anyone’s wife this time, so that’s one positive everyone can take from it. The guy’s also been hitting the gym hard despite the state of his leg, so fair play to him on that too. The guy might be an utter bellend, but he’s a hardworking and entertaining one.