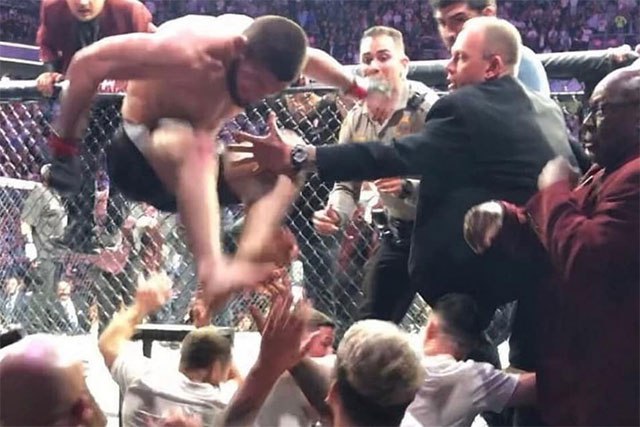 He’s not innocent in this one.

The ugly scenes surrounding the climax of UFC 229 will live long in the memory, but right now people are still trying to decide the exact consequences of them.

Originally it was thought that members of Khabib’s entourage jumped the cage to blindside McGregor following Khabib’s attack on Conor’s crew and this meant that Conor would not be facing any charges or repercussions from his actions. However, video footage from a new angle has emerged which throws that narrative on its head, as you can clearly see below.

Conor actually scaled the cage himself and punched someone from Khabib’s crew after Khabib stomped on his teammates meaning that he didn’t make it to the outside. Can you imagine how much worse this would have been if he had got out of there and been fully involved with the scrap that ensued?

Yeah in fairness you kinda have to rate Conor for wanting to help his mates and for not getting further involved, but I don’t think you can deny that he did smack that guy even if what happened to him afterwards was pretty out of order. Guess you shouldn’t talk the talk if you can’t walk the walk though eh?

We will be filing against Conor McGregor and Khabib Nurmagomedov. Because we withheld one purse, we will have to move expeditiously to a complaint and hearing.

We have held 100 percent of one of the fighter’s money. Temporary suspensions will be out shortly, and we’re shooting for a final hearing date in November.

Gonna be a little while before we find out what happens to both of them then. Hopefully not too much though as we know everyone wants to see that rematch.

For more of the same, check out these Conor and Khabib fans fighting each other as well. Taking after their heroes I guess.