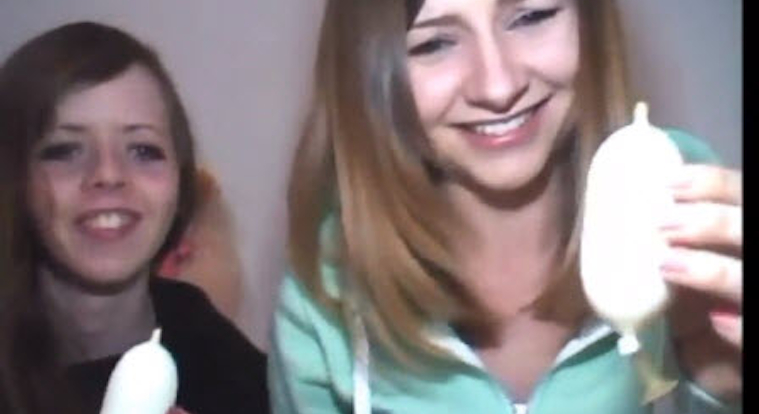 Apparently in Japan there’s such a thing as condom ice cream, and these two brave Canadians do their best to eat it. The results are somewhat surprising and pave the way for the most sexual innuendos I think I have ever seen in one video.

We all know that Japan and Russia are completely screwed up and weird, and it seems that not a week goes by here on Sick Chirpse where we don’t talk about something messed up in one of those countries. This week is no exception. I’ve got something cool coming up about Russia too which should be up tomorrow, but in the meantime let’s take a look at these two Canadian girls who are living in Japan for some reason and decided to try what they have termed ‘Japanese Condom Flavoured Ice Cream.’

Ok, so I don’t think this is the actual name/flavour of the ice cream (I mean it’s highly unlikely that anyone would make a flavour of ice cream that tastes like rubber mixed with spermicide, even the Japanese right?) but it definitely looks like it could be called that. This video starts with these two Canadian girls walking around a Japanese supermarket and looking at all the weird stuff they can find – which of course there is a lot of – before finally coming to rest upon an ice cream that kinda looks like it comes in a giant white blimp that looks a bit like a blown up condom. Obviously they pick it up and take it home and that’s when the video really gets good.

I don’t think I have EVER seen as many sexual innuendos in one video as I have in this one. They hold the condom (I’m gonna call it a condom for the duration of this article because it’s funnier than saying something like container or balloon) up to the camera and snip the end of it to let the ice cream out and well, it just kinda goes everywhere. I don’t think I need to tell you what it’s very reminiscent of after you’ve seen it, especially when both girls immediately cram it into their mouths and start sucking on it.

They can’t take it all though and loads of it goes all over their laptop too. I bet 90% of people reading this have had that problem too in the past. They also get it on their teddy bear, which probably hasn’t been a problem for that many people reading this except my old pal Joe Warner, as well as all over their legs which I guess might be a problem for some girls if the guy they’re banging uses the pulling out method of contraception.

The condom ice cream just gets weirder and weirder though because it just keeps coming out of the condom like unlimited whipped cream or something. It seriously looks really weird and really gross, and it perplexes me why something like this even exists because it looks like one of the most difficult things to eat properly ever. I mean when you normally get an ice cream you probably just wanna walk down the street licking it or whatever, with this ice cream you’re gonna struggle to get it all in your mouth because it’s just going to be going everywhere, all over the place. It really is badly designed. I was also kinda disappointed the girls never mentioned what it tasted like either, although I doubt even if was chocolate chip cookie dough flavour that I could be convinced to have a go on it.