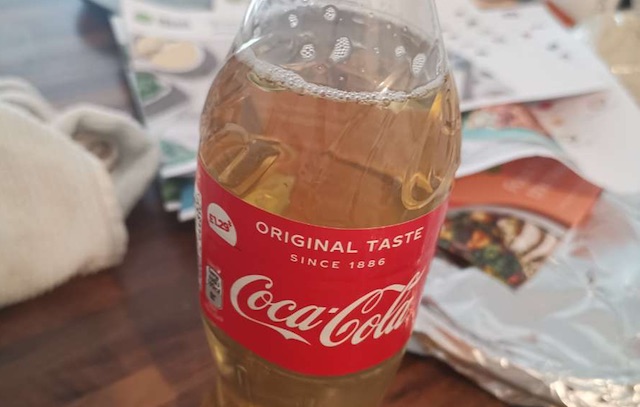 Here’s a great story to make you feel better about your Monday morning after it was revealed that someone ended up with a bottle full of piss inside their Hello Fresh order. Not exactly what you want when you open up that box, is it?

Boxing writer Oliver McManus was expecting to find his hoisin beef and yoghurt spiced chicken when the box arrived at his house, but instead found the grotty looking big Coke bottle full of urine packaged along with it. He announced his discovery via a tweet which has understandably proved quite popular on the social media platform.

Hey @HelloFreshUK , I’ll keep it simple: why have I received someone’s bottled up piss as part of my order?

Look forward to your response on this one. pic.twitter.com/kqogjoMzWh

I think it may have been added sometime during the delivery as the box wasn’t sealed properly and it was just sort of nestling on the top.

I’m surprised so many people are interested and the last thing I’d want is for anyone to get sacked or in trouble as a result of this incident- it is unfortunate that it happened but it is what it is.

As it happens the actual food they delivered, which was in sealed packaging, was very tasty!

To answer some FAQs about the HelloFresh fiasco, and this is the last I’ll say on it – Am I concerned about wider working conditions in the UK? Yes.

Do I think anyone deserves to be sacked? No.

Did I think so many people would care? No.

Will I keep tweeting about boxing? Yes.

Yeah, sounds like it was probably a delivery driver who got caught short whilst doing his rounds and the bottle accidentally ended up in the package. It’s rank sure, but it sounds like it was just an accident and at least McManus has recognised that and doesn’t sound as if he’s out for blood or anyone’s job. Kinda awful that delivery drivers have to go to those lengths, but I guess we all kinda secretly know that already don’t we? Hopefully their working conditions change and this tweet can contribute to that change, although I severely doubt it.

For more of the same, check out this guy who says that drinking 7 pints of his own urine every day helped him beat depression. He probably would have loved that delivery.