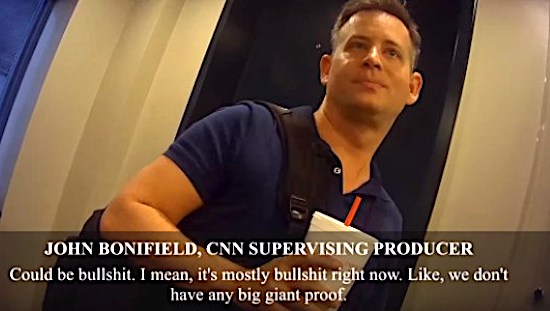 Turns out, it really was fake news.

Fake news is one of the biggest problems out there in modern society today and it would seem that people’s distrust of the mainstream media is somewhat justified after looking at the video below.

The video is taken by Project Veritas and features one of their journalists talking to CNN producer John Bonifield. The footage reveals that CNN is largely making up their coverage of Russia interfering with the US election, and that they’re only pursuing it because of the great ratings that they’re achieving despite the lack of quality evidence suggesting that there was any wrong doing on Trump’s behalf.

Bonifield even goes as far as to say that he believes that Trump has a point when he calls the whole thing a witch hunt and doesn’t blame him for getting vexed about it:

Well. I’m not sure if we can believe everything this guy is saying, but I’m fairly sure I can believe one thing: he’s absolutely getting fired ASAP.

In all seriousness though, I did often think that Donald Trump calling everything fake news was some kind of publicity stunt, but this really has opened my eyes. Can’t really trust anyone these days, except maybe Sick Chirpse. Stay vigilant.

For more CNN, check out when they actually thought that 4Chan was a person. Awkward.