I think it’s fair to say that everyone out there was saddened at the death of Captain Sir Tom Moore yesterday after a brief battle with COVID, but there are also those out there who think that it was ridiculous that a 100 year old man was forced to walk around his garden over and over again in order to raise money for an underfunded NHS. Surely he should be the one receiving the benefit of the NHS if it was actually working properly, rather than fundraising to save it at his age?

Anyway, that’s a point for another time, but another source of controversy was the government’s idea to clap on our doorsteps last night at 6pm to celebrate the guy’s life, led by Prime Minister Boris Johnson (even though he previously said that he didn’t believe in symbolic gestures when it came to the Black Lives Matter movement). Whether or not this was a useful way to honour Captain Sir Tom’s life is questionable – you know, maybe fund the NHS in his memory instead of a complete worthless symbolic gesture as that was literally what he was campaigning for – but one Church Of England Reverend took that criticism to the next level.

The cult of Captain Tom is a cult of White British Nationalism.

I will offer prayers for the repose of his kind and generous soul, but I will not be joining the “National Clap’. 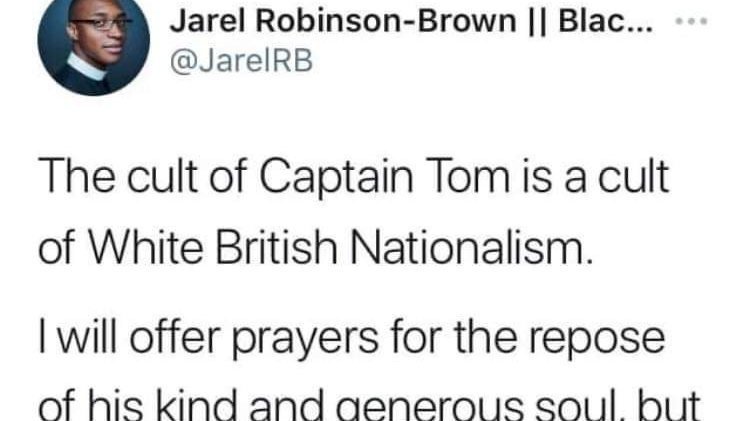 Yeah, maybe the second half of that tweet I agree with but I don’t think that Robinson-Brown could expect to get away with the first half of it because you can’t really accuse people of Nazism because they want to honour their hero Captain Tom for his excellent fundraising efforts. He quickly found this out and was forced to delete the tweet, instead posting:

I offer an unreserved apology for the insensitive timing and content of my tweet regarding the clap for Captain Tom.

Probably for the best there Jarel. Really gotta think about these things and the consequences from Flag Twitter before you post this stuff. Can’t really go around accusing people of being White British Nationalists for supporting an old guy walking around his garden with a zimmer frame in his back garden to raise money for the NHS, even if there might be some modicum of association between the two.

Anyway, in closing thanks to Captain Tom for raising so much money for the NHS and I hope he rests in peace. Just wish he hadn’t even needed to do it in the first place and that his efforts might actually lead to the NHS getting the money that it deserves and requires, but I doubt that’s ever going to happen. At least the NHS and Sir Captain Tom got a few people clapping though.

For more of the same, check out Captain Tom’s brand of gin that he launched last year. Heroic.