Is this an example of taking revenge too far?

Remember Clementine Ford? We wrote up her story a year back after someone had been a misogynist prick to her, which somehow resulted in HER being banned from Facebook instead of him. That NSFW selfie she posted may have had something to do with it to be fair.

Fast forward one year, and not only is Clementine back on Facebook, but she’s still dealing with sexist morons on the regular. Only this time she’s fucking had it, and ended up reporting a man who called her a “slut” online to his company and caused the man to lose his job.

Michael Nolan, who was a hotel worker at The Meriton Group, also called her a “whore” and a “bitch who should kill herself” after she named and shamed him.

Clementine shared the message he left her on Facebook, plus a link to his Twitter profile which stated the company he worked for.

I wonder if the folks over at Meriton Apartments are aware that a man listing himself as a supervisor for their business likes to leave comments on women’s Facebook pages calling them sluts.

Some people bigged her up, while others condemned her for ruining the guy’s livelihood.

These men don’t get to just go around leaving these kinds of comments and attempting to degrade women just for the hell of it.

This was a comment left on the thread of a screenshot of a man publicly saying I would jibber less with a cock in my mouth.

Calling me ‘slut’ in response to that is baffling, unless this man genuinely believes that women who speak out against abuse need to be taken down. Why should I put up with that?

The Meriton Group got in touch with Ford to let her know they gave Nolan the sack.

I’m sick and tired of men abusing women online and continually getting away with it. Women have tolerated this kind of abuse for too long. But out there on the vast ocean of men’s tears, the tide is turning. Get on the boat or drown. 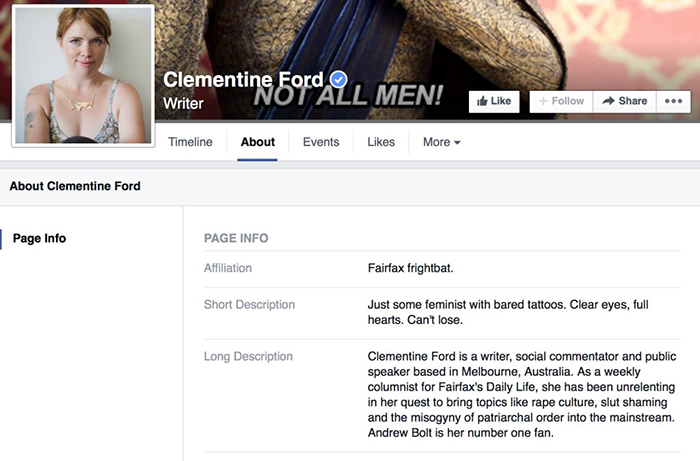 I guess you could argue that she took her revenge too far by costing the guy his livelihood. I mean anyone who’s a public figure (Clementine’s page is an author page, not a personal FB account) is going to get called a wanker or an arsehole or a slut from time to time. It’s not personal. It just comes with the territory of having any kind of audience or platform, especially on the Internet.

At the end of the day though, if you’re dumb enough to leave a sexist comment under your real name on Facebook or any social media platform, you deserve everything you get.

Still, as we found out not long ago, men are apparently sexist no matter what they do.