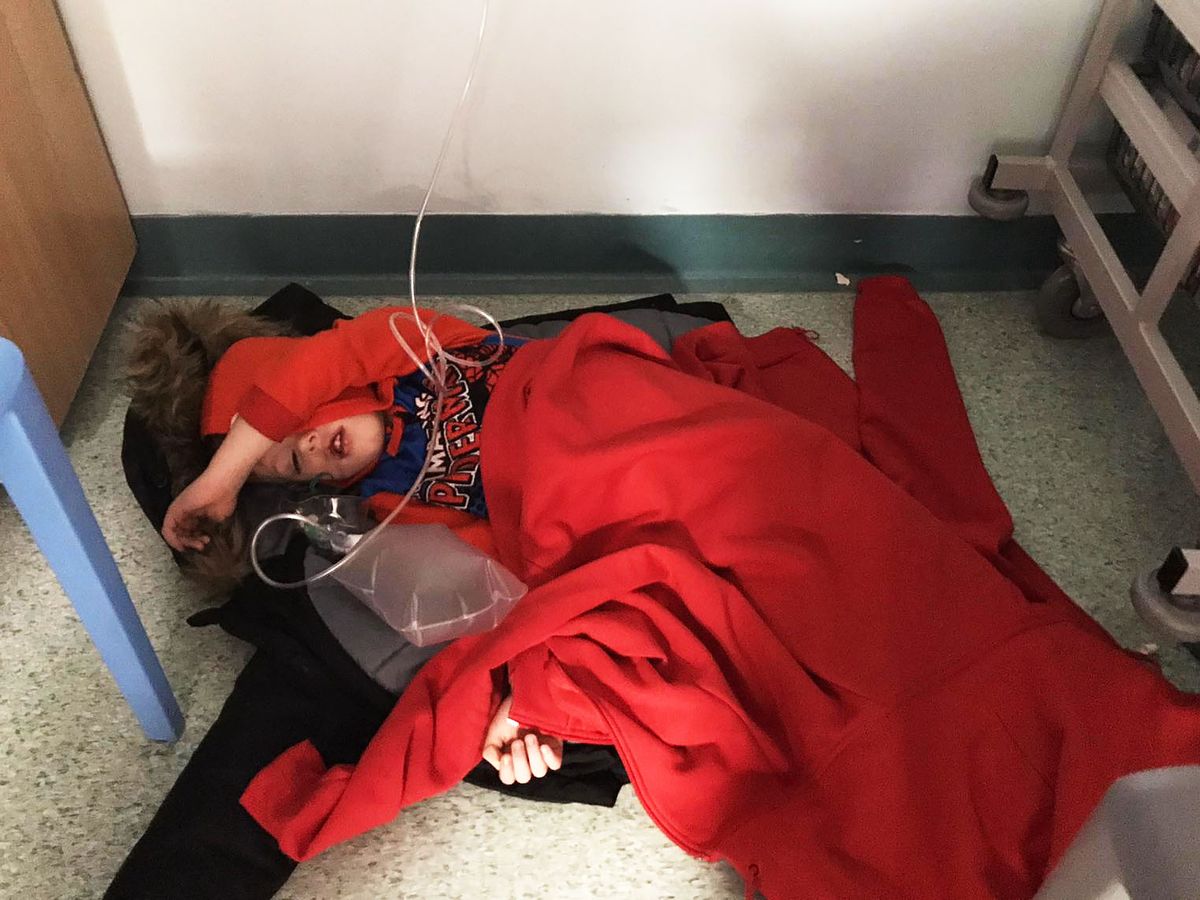 A massive disinformation campaign has been employed.

OK this is obviously going to be controversial so I’m going to try and look at it is objectively as I can and just run through what I’ve seen from various sources over this morning as I’ve looked into it. Some might even call it journalism, but I don’t want to blow my own trumpet or anything.

Anyway, I’m sure we’re all aware that yesterday a photograph did the rounds of a four year old boy who was allegedly forced to lie on the floor at the hospital in Leeds over the weekend for four hours whilst he waited for treatment because there weren’t any beds. There was even a weird bit where Boris Johnson refused to look at a picture of it and stole the phone off the journalist showing it him.

Shortly after all that went down, a story started going around that the photograph was actually staged and that thad all been made up by Labour activists to try and illicit a reaction from the general population. I suppose in the era of fake news and dirty underhand politics this is more than believable and it led to tweets like the ones below from ‘respected’ journalists and other commentators/influencers/whatever:

Well, well, well …. re the story of the little boy on the floor at Leeds Hospital….

Hands up if you’re not surprised?? pic.twitter.com/ZXuVbDmBkh

Confirmed that my source is indeed a nurse from the hospital. Her account: ‘Every member of staff’ there at the time knows that 1.Yes it was busy. 2. No, the child was not treated on the floor. 3.A bed WAS available. 4.The child was ‘placed’ on the floor for a photo. Will update.

So I have detailed explanation from paediatric nurses explaining why photo of child on the floor is “100% faked”. I will put in @Telegraph on Weds.
Stage a photo. Cause outrage. Castigate people who doubt it for showing insufficient compassion. Jesus.

He was not “forced to lie on a pile of coats”. The parents staged it. A Great Ormond St nurse has explained to me in detail how it is “100% faked”. That poor child used as a political pawn! https://t.co/rXP0orKu5u

I mean this is all very well and good and you might believe it’s correct – perfectly rational – until I read this incredible analysis of fake news from Professor Mark Owen Jones who analysed how Allison Pearson had come to this conclusion:

2/ What’s interesting about this is the extent to which these accounts are targetting @allisonpearson – the columnist for the @Telegraph who has indulged the sock puppet accounts by seeming open to the idea that the photo was staged. I have done a small visual showing this…

4/ for Allison. The original seeder of the fake tweet appears to be @medwar93 – which got 91 retweets. Shrewdly, @NitishRamparsad noticed that Mike had quite the career. Not only being an A and E nurse, but also a 35-year career in supply chains… Hello multi-use bots. Fin pic.twitter.com/NUgE7UFsx3

2/ Firstly, the bots and sock puppet accounts are on the case on Twitter. As you can see, an identical tweet claiming the mother staged the photo was circulated on Twitter. It’s literally copied and pasted, and the accounts are targeting it at various influencers pic.twitter.com/OtdfBnRKnw

4/ In one example, Jason Crosby pastes the tweet on the FB group for “Seaham Have Your Say”. Seaham have your say is a page with 24k followers serving the North Eastern coastal town of Seaham. His post gets 91 comments and 26 shares. pic.twitter.com/kgW3x31a57

6/ It’s interesting to note that in addition to targeting national level Facebook groups, a lot of these accounts are targeting influential local Facebook groups such as that of Cambridgeshire and Seaham. We know the role local FB groups are said to play in this election

8/ It’s 3.20 am here and I’m tired but I’ll wager @allisonpearson is perhaps the most influential proponent of the faked floor theory. Stay tuned for her expose in the telegraph. I hope she interviewed the senior nursing sister! Night all ! https://t.co/FDxkiXzhnr pic.twitter.com/ZfH4u1jUzQ

Our Chief Executive Julian Hartley has spoken to Jack’s mum and offered a personal apology.

“We have seen a significant increase in the number of people visiting our Paediatric Emergency Department, and this week we saw the highest attendances we have seen since April 2016. 2/

“Within four hours a decision was made to admit Jack to our Children’s Assessment and Treatment (CAT) Unit for further monitoring overnight. 4/

Jack was admitted to the CAT Unit later that evening and was discharged home the following morning after a medical review.

“We are extremely sorry that there were only chairs available in the treatment room, and no bed. 6/

This entire comment was received through direct contact with the hospital, verified by their communications team and included within each subsequent article.

I mean again, can you argue with that when it's come directly forms he hospital and their communications team. If you can, then here are another few screenshots clearly showing that the Sheree Hepburn-Jenner is a fake account and that the exact same wording used in her statement was used by several other fake accounts:

So I went down a rabbit hole after seeing the Sheree Hepburn-Jenner post shared on Facebook, it stunk of BS.

Guess what, the exact statement is being posted by folks all over Facebook. Isn’t it strange that all these people know the same senior nurse at Leeds Hospital?! pic.twitter.com/Gmy6npqK8o

I looked up Sheree Jenner-Hepburn on Facebook shortly before her account was taken down. Her work details suggest she works at this place, whose phone number checks out as being a surgery in Washington DC - a long commute from England. Don't fall for bots. pic.twitter.com/9fJnhWo6JG

Here's where @theSun got the name Sheree Hepburn-Jenner. They thought we'd be too stupid to notice they made the whole thing up. #GE19 #DontBuyTheSun #LeedsGeneral #FakeNews pic.twitter.com/iIyiatxnyB

Yes, I'm aware that Dave Bryant's post doesn't have any link to Hepburn-Jenner in the screenshot, but just the fact that the profile has been deleted probably tells you all you need to know about it anyway. And the fact that there are screenshots of multiple accounts with exactly the same wording targeting influencers should really be enough to tell people that it's fake news and that the Tories are literally lying to us all time? Hope my parents read this one.

Crucially, Kevin Pieterson - the most high profile of people who fell for it - has now deleted his endorsement of it and apologised, but the damage has probably already been done as multiple people will read the first one and believe it to be true as for some reason that's just the way they want to accept things. Really need to try and change that mentality and hopefully this article will help in some small way to do that.

Couple more days to decide who to vote for. Think about it.

Even if Allison Pearson and Jay Beecher do come up with interviews with the head nurse for tomorrow can they even be believed when we know that a massive underhand disinformation campaign was employed targeted at them to get them to reach these opinions? Do you really want someone like that in power? Think about it.

For more of the same, check out this fake news plugin finding that the Daily Mail can't be trusted. No shit.