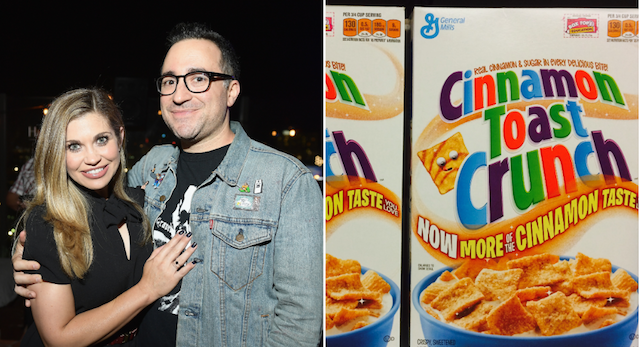 Last night I finished my article about the Cinnamon Toast Crunch guy being married to Topanga from ‘Boy Meets World’  hoping that if I logged off for ten hours that the story would take an even more bizarre turn and guess what? That’s exactly what happened.

After finding out that Jensen Karp was married to Topanga, the internet moved swiftly to actually cancel the guy after a bunch of his ex girlfriends decided to bring up their experiences with him and label him a creep/abuser. Here’s what they’ve been saying:

“What you may not know about the man behind the viral posts” what like he’s a manipulative gaslighting narcissistic ex-boyfriend who once told me he was surprised I hadn’t killed myself because my life was so worthless?

Look, I’m no sweetheart, I’ve done/said some dumb things dated problematic men, but to have so many women reach out with the SAME EXACT story confirms that what I dealt with wasn’t because of me. It’s a disturbing tactic he used to control and demean women.

That this is the most abusive person I have ever been with and I am crying as I type this. https://t.co/fCFKoFYV4w

The amount of women who DM’d me with stories today. Let alone the ones I have known about for years and talked to about our shared experiences. Oh lord

I ended up in the hospital. Took me a year to recover mentally and I still struggle.

Er wow? I don’t think I could have ever predicted that this was the next step in this quite frankly absolutely wild story. How can a guy go from being a nobody to a major celebrity to cancelled in under 48 hours? Twitter, that’s how. Absolutely phenomenal chain of events.

In all seriousness though, these are some pretty dark allegations and the fact that there are at least three women – and apparently many others – that are talking about it means that this Karp guy probably is a bit of a piece of work. Thoughts and prayers with the survivors and sorry they had to go through that experience with him. Worried about Topanga too in all of this.

What’s funny/ironic though is that this guy might end up losing his job/livelihood because of all this but if he had never tweeted about the shrimp tails in his Cinnamon Crunch Toast then he would still be out there doing whatever the hell he wanted and nobody would know who he is or care. The world moves fast. He hasn’t said anything since these allegations started gaining traction btw.

For more of the same, check out Bill Maher cancelling cancel culture in the best monologue of the year so far. Not sure if it’s appropriate in Karp’s case though.