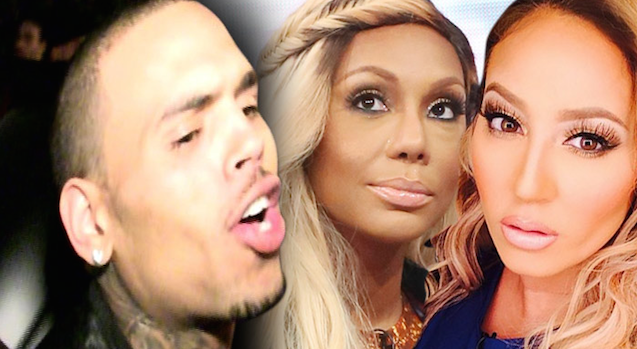 He uses some creative insults like ‘muppet face ass’ and ‘trout mouth bitch’.

Chris Brown’s anger issues have been widely documented, but it seemed like he had turned over a new leaf following his enrolment in anger management classes (because we all know they work), but if this latest video is anything to by that certainly doesn’t look to be the case.

It all kicked off when two people called Tamar Braxton and Adrienne Bailon who present a show called ‘The Real’ over in the states – which I can only assume is their version of Loose Women where people just tell it like it is – called out his current squeeze Karrueche Tran. They accused her of only putting up with Chris’ alleged infidelity because her and her friends love the fame associated with him. You can see a clip of that below:

Chris didn’t take kindly to this and took to his Instagram account to voice his thoughts on the matter. Get ready (it was later deleted so we’ve just got the transcript for you, sorry):

BRING THAT ASS HERE BOY’ ADRIENNE BAILON…. You ole trout mouth a** b***h. U tried it. Won’t u the same b***h that was f***ing wit married men? U also was keeping up with the Kardashians! U can’t talk about relationship goals when u don’t even have life goals. Ain’t you a cheetah girl? Last time u was important [expletive] was riding spinners and wearing 6x talk Ts. You the same b***h having threesomes like the rest of these hoes. U tried it too Tamara Braxton. U take the role of the ugly sister. It’s always the people wit no career that talk all the shit. Dat plastic surgery f***ed yo face up. B***h look like she always saying ‘huh’? Muppet face ass! #basicb***hproblems #thotiannas I don’t even need a photo for Tamar, that b***h is beat in every photo! #icanmakeabrokeb***hrichbutidontf***witbrokeb***hes.’

Intense right? He also posted the video you can see below which is just really stupid and immature. Sounds like he needs a better anger management counsellor.