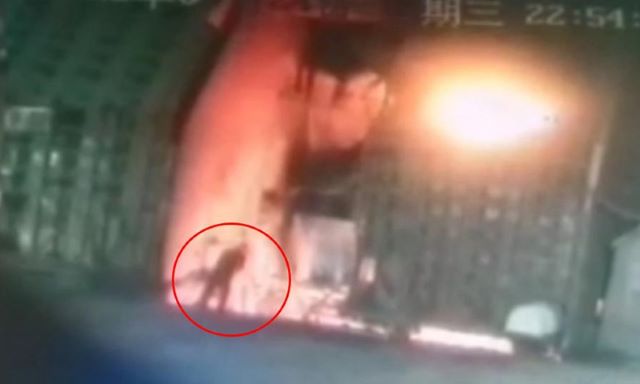 Baogang Group, one of China’s major steel producers, confirmed this week that a steel worker with the group had committed suicide allegedly due to losses from stocks and futures trading.

Footage shows 34-year-old Wang Long walk to the slag spray port during the smelting operation, which was glowing red due to the extreme temperature. He stands at one side of the port, peeks into it, takes off his safety helmet and then jumps inside:

[Do not watch if the footage is going to distress you]

Damn, what a way to go. Apparently it can get anywhere between 900 °C to 1300 °C in there – would you even realise what was happening before you perished?

In an announcement released on the firm’s WeChat account, Baogang Group said the worker had worked in the company for over a decade. According to the announcement, Wang went missing on March 24, 2021 while on a night shift. The company immediately carried out a search, and CCTV showed him committing suicide.

According to his colleagues, Wang was introverted and unmarried, and had been buying futures and stocks through securities companies for a long time. On March 24, the day he committed suicide, he had lost more than 60,000 yuan (£6,000). The company suspects his suicide was related to the losses and his inability to repay his debts.

While I’m sure there was more going on his life than just the £6,000 loss, you have to imagine that on this particular day it was the final straw that sent him over the edge. Industrial companies in China are notoriously ruthless and demanding; according to the Global Times, Baogang Group itself has assets of more than 180 billion yuan (£19.9 billion) and 48,000 registered employees. Reckon they offer mental health services and aid to their employees? Yeah, me neither. RIP Wang Long.

For unreal footage of another Chinese factory worker being literally blown to smithereens, click HERE.