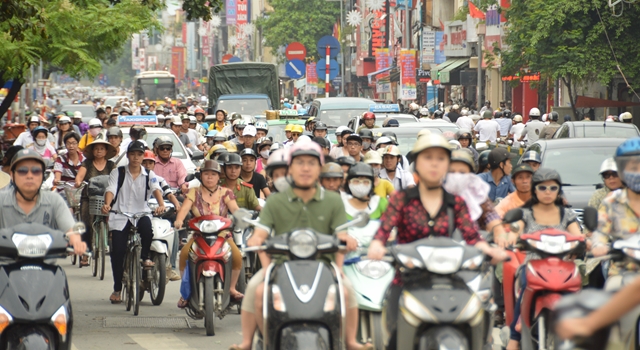 If you’re riding a motorbike in China you take your life in your hands. This guy is lucky to be alive.

I’ve not driven a motorbike in China but I’m presuming it’s a pretty dangerous place to ride around. I found this quote below on Wikipedia which gives you a bit of an idea of the levels of bedlam on Chinese roads, they’re saying that the Chinese generally drive on the right but:

…driving to the left into oncoming traffic is not uncommon in China, nor is it as stigmatized and penalized as it is in other countries. This is especially true of bicyclists, electric bicycles, and motorcycles who–unless physically prevented by barriers–are almost equally likely to be found riding on the right, left or straight down the middle of lanes of traffic.

So, to be fair, the dude on the bike in this clip, although he isn’t really following the road and sort of deserves a pounding from a lorry, apparently this is the norm.

The video is set in Ningbo, Zhejiang and if you don’t take a sharp intake of breath when the lorry rolls over him there’s something wrong with you. How he managed to avoid all 18 wheels I’ll never know. Lucky sod, check this out:

See? That’s nuts isn’t it? Did you do the sharp intake of breath? I bet you did. Any way, so I carried on reading a bit more about Chinese road etiquette whilst you were watching that. Interestingly road rage is much rarer in China. This is possibly because:

Chinese motorists have fewer expectations that other drivers will offer to “give way”.

I love that. Set your sights a bit lower, don’t expect people to nice to you and you’ll be less disappointed in the long run. I think that’s a pretty good general rule for life. I guess if you work in one of those hideously awful Chinese Apple factories you won’t have the energy to be angry any way.