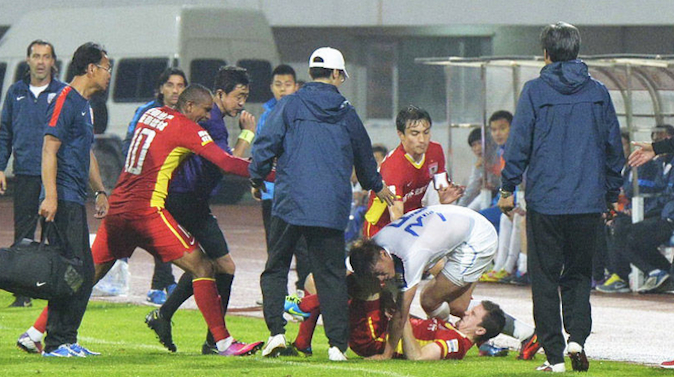 I’ve seen some pretty unjust red cards in my time watching football but this is probably one of the worst of the lot.

Not really sure what to make of this one. This happened over in China last week, when fallen giants Shanghai Shenhua (who Drogba and Anelka once played for) were in a 6 point relegation dogfight with Changchun Yatai when this bizarre incident occurred towards the end of the match.

There was a coming together between Shenhua midfielder Wang Shouting (incredible name) and Yatai’s Matt McKay (who the hell is this guy and why is he playing in the Chinese league?) in which McKay slumped to the floor looking as if he had been shot in the stomach or something.

He was obviously feigning injury to waste time in such a vital fixture (Yatai were winning 1-0 and went on to win the match 1-0) and so Wang Shouting got pretty angry with this guy and dragged him off the pitch so that he could receive treatment, because you know, the game can continue if a player is off pitch receiving treatment for an injury.

To be honest I thought this reaction was fair enough and I’d like to see players over here adopt that attitude because nobody likes it when someone dives and rolls around on the floor to try and gain an advantage for the team, it just isn’t really the English way is it? Unfortunately the referee of this match didn’t see it my way (or the way of 99% of people who watch football) and decided to send Shouting off for the offence, if you can call it an offence.

Ouch. I mean it’s not even like he dragged the guy very far and it only gets violent because Matt McKay is suddenly not hurt and starts reacting to him. Totally unjustified. But still kind of LOLz.