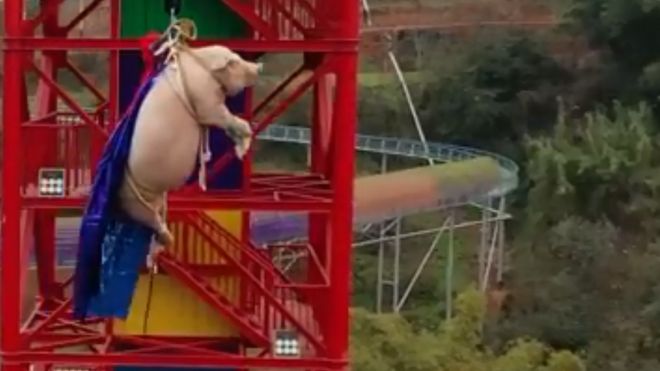 I’m not really sure how the openings of amusement parks are normally celebrated, but I don’t really think that anyone in their right mind would choose to do this by forcing a pig to take part in a bungee jump.

Except in the Chongqing region of China that is, where the opening of the new bungee jump attraction at the Meixin Red Wine Town theme park was commemorated by a pig bungee jumping from the top of the 68 foot tower. It was then sent to a slaughterhouse where it was murdered, so I suppose if we’re looking to find anything good from this story it’s that it wasn’t permanently traumatised by its experience for too long. Not that that’s really doing much there.

You can see the video below, but be warned it’s pretty distressing and even more heartless than the way I described it:

Awful. Seems even weirder that there aren’t even any crowds or anything – it’s literally just a couple of guys carrying a pig up a crane and then pushing it off. Sick bastards.

Surprisingly given the traditional Chinese attitudes towards animals, this has actually kicked up a bit of a fuss over there after it was shared on social media with many people saying it was pretty much torturing the pig and that it was way different to killing an animal for food. Gotta say that I agree with that and there’s literally no need for this to have happened whatsoever.

The theme park have apologised, so I guess if anyone else was thinking about pulling a similar stunt maybe they’ll think twice after it turned out so badly for them. Can’t really think that anyone else in the world would be contemplating that though really, can you?

For more pigs, check out this woman who was eaten alive by her own pigs. Ouch.