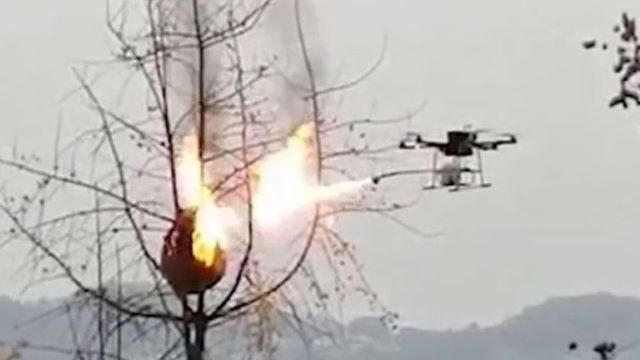 China one step ahead of the game.

Blue Sky Rescue, a volunteer group that conducts search and rescue and other emergency work in China, have come up with a genius solution to eradicate more than 100 wasps nests in Zhong county near the city of Chongqing.

The group raised 80,000 yuan (£9,100) to buy a drone and equip it with a gasoline tank and an arm-length nozzle, resulting in this – a goddamn flying flamethrower:

Emergency responders in central China have converted a drone into a flying flamethrower as part of a fiery campaign to destroy more than 100 wasp nests. https://t.co/MV1q7wKCtr pic.twitter.com/spgKQjh2tF

Welp, if you’ve ever been in doubt that China is always one step ahead of the game and ready to take over as the worlds #1 superpower, this video ought to convince you.

Obviously not saying this is next-level technology or anything, but just the fact they dreamed this up and were willing to make it into a reality is just something I wouldn’t see happening in the UK or US. I mean we have drones and flamethrowers and the ability to combine them over here too, but could you ever imagine us actually deploying a weapon like this? We’d spend months on permits and health & safety and all the rest of it and it would probably be years before we actually saw a flamethrowing drone come into fruition. In China however? They just make it happen.

So while the rest of us carry on poking wasps nests with sticks and throwing rocks at them, China is annihilating them with fire-breathing dragon drones. Once they’re done with the wasps, you know they’re going after the murder hornets too. Maybe they could use them on bats afterwards as well? Just a thought.