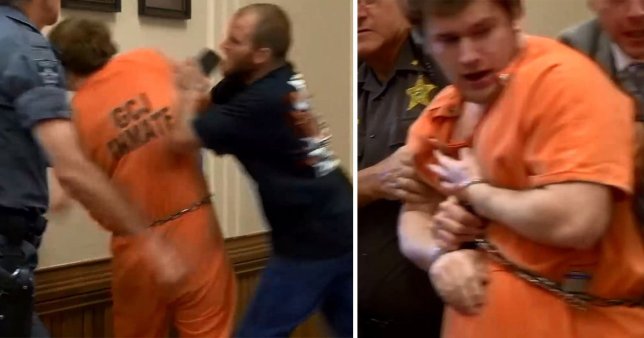 A video has emerged of the moment a man was punched square in the face just moments after receiving a prison sentence for killing his own child.

Kwin Boes, 23, was taken into custody last year after police found his three-month-old son Parker had died from a blunt force to the head.

Boes pleaded guilty to domestic battery resulting in death and was this week sentenced to 25 years behind bars as well as a fine to cover funeral costs.

As he was leaving the court room in shackles, the victim’s uncle Jeremiah “Matt” Hartley rushed in and punched him in the face.

The pair had to be separated by court bailiffs at the courtroom in Evansville, Indiana. And while the act was clearly a result of Jeremiah’s anger towards Boe for what he did to his nephew, he was arrested too and is now facing a battery charge.

Jeremiah’s mother, Lisa Hartley, told news station WEVV she had no clue her son was going to attack Boes.

That really upset him just to see him come out.

I don’t know if he heard how much time he got or if he was just upset about his nephew. This is a horrible crime.

She described Parker as “such a sweetheart”.

It’s an infant and it’s hard to deal with that. You just have to cope the best you can.

I can’t imagine what they’ve been going through really.

It truly is a sad state of affairs. RIP to Parker and thoughts go out to his family – here’s hoping Jeremiah gets off without charge, the guy was clearly just overwhelmed with grief.