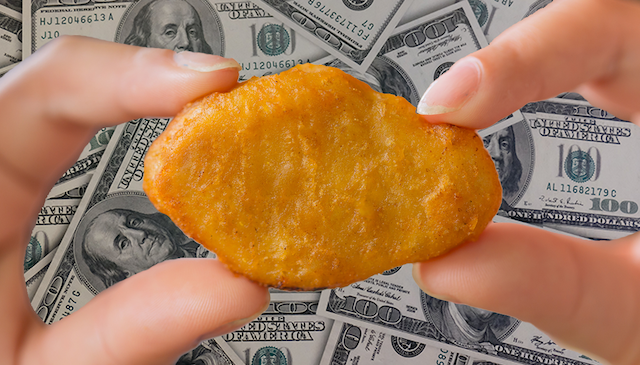 People have more money than sense.

One of the best subsections of the internet is people spending ridiculous amounts of money on absolutely useless products and we’ve been seeing a lot of this in 2021 with the advent of the NFT phenomenon, but this story is a more traditional purchase of something completely stupid.

A chicken nugget that bore a resemblance to a character from super popular last summer video game ‘Among Us’ was listed on eBay on May 28th for the price of 99 cents and somehow managed to attract 184 bids before finally selling for $99,997. At first I didn’t believe this was actually real but I don’t think you can argue with the screenshot here:

$100k – The McDonald’s AmongUs chicken nugget auction has ended. What a time to be alive. pic.twitter.com/7UNQbcNjim

So what the heck would possess someone to drop almost $100,000 on a chicken nugget that looks like a video game character. My first inclination would be that this was some kind of promotional team up between McDonald’s and ‘Among Us’, but if you look into the account info of the guy that ended up buying it, there’s a long and varied history of purchases so it looks like it’s actually real. So I’ve really got no idea after that. Wonder what this dude is going to do with his special chicken nugget? Hopefully not eat it?

For more of the same, check out this guy who beat up a McDonald’s manager because his nuggets weren’t cooked properly. Maybe he’s the mystery man who purchased the nugget?