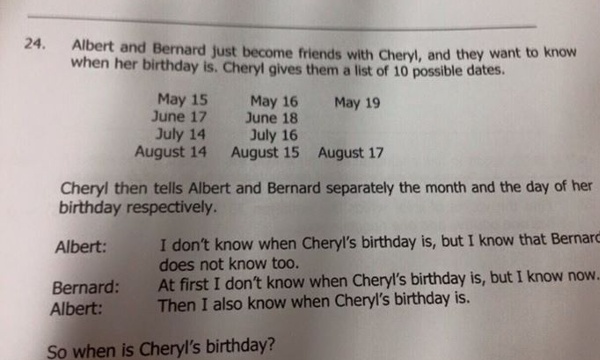 Can you answer this?

In a situation not too dissimilar to the blue/gold dress thing the other month, a math problem that was initially posted onto Facebook by some dude in Singapore has gone viral because it’s basically tying people’s brains in knots trying to figure it out.

Cheryl thought a second and said, “I’m not going to tell you, but I’ll give you some clues.” She wrote down a list of 10 dates:

“My birthday is one of these,” she said.

“Can you figure it out now?” she asked Albert.

Albert: I don’t know when your birthday is, but I know Bernard doesn’t know, either.

Bernard: I didn’t know originally, but now I do.

Albert: Well, now I know, too!

When is Cheryl’s birthday?

Either this question makes no sense at all or I’m a complete math dumbass (yep), because all I’m getting is anxiety trying to figure it out. D’you think you’ve got the right answer? Click/slide over to the next page to see if it matches up…