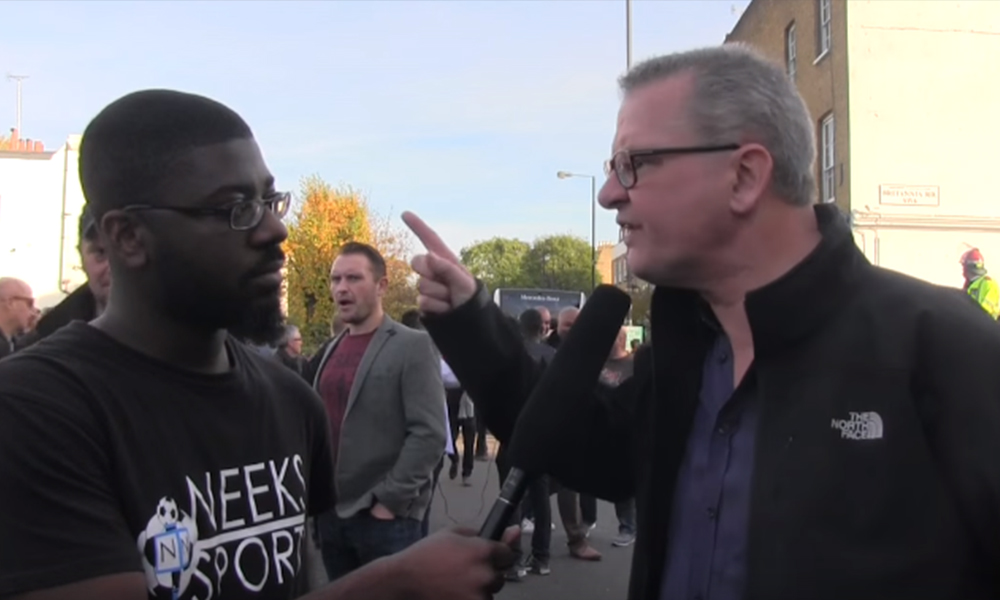 Chelsea fan Clive O’Connell went viral recently after going on a huge rant to Neeks Sports outside the ground after his beloved team lost to Liverpool.

The video is pretty funny – mainly because the guy is such a bellend. It beggars belief to see a bloke of his age – that is actually a lawyer – going on a childish rant about there being no better manager Jose Mourinho, the FA having a secret agenda against Chelsea and how Liverpool fans are ‘scum’.

Seriously, check it out below:

Now, he’s in the wrong for a number of reasons.

Firstly, the best manager in the world probably isn’t sitting just above the relegation zone, 15 points behind the league leaders.

Secondly, he claims that the FA have an agenda against Chelsea – this was the same week that the FA decided not to take action against Diego Costa being a top shithouse. Work that one out.

And finally he’s branding Liverpool fans as scum. It isn’t the smartest of moves, especially when you work for an international law firm that prides itself on ‘inclusion and mutual respect’ and employs several Liverpool fans.

Last year, Clive was named best lawyer for insurance law in the 2014 Best Lawyers in the United Kingdom guide. Now, though he is just an unemployed lawyer, after his company Goldberg Segella publicly released this video announcing their sacking of him:

Clive did try to apologise for his outburst:

I was very disappointed in the aftermath of Saturday’s game.

I let my emotions get the better of me.

I clearly regret this and any offence that I may have caused by my hot headed and regrettable reaction, which was inappropriate whether or not caught on camera.

It sounds pretty honest, until you take into account it isn’t the first time he’s slagged off Liverpool and Scousers in general:

Despite his apologies, Goldberg Segella’s Global Insurance Services have fired him with the company Chair Daniel W. Gerber saying:

Clive O’Connell’s comments are entirely inconsistent with our ethos.

His words are offensive. Plain and simple.

His conduct doesn’t rise to the standards to which we hold ourselves. And for these reasons we have terminated our partnership with Mr O’Connell effective immediately.

It might seem a bit harsh that he’s been sacked, but there’s very likely something in his contract saying they can sack him for tarnishing the company image. Being a lawyer he really should be paying attention to the small print.

I can’t stop watching and laughing at him, though. He’s like a Harry Enfield character. The bitter hatred seething from him when he calls them scum is amazing, especially coming from a fan of a team with racist fans that stop black people from getting on a train and helmets like this that claim to know about players that don’t exist. You couldn’t make it up.